After his match-wining performance, Ashton Agar revealed that a chat with his "favourite player in the world" left a big impression on him and gave him immense confidence. 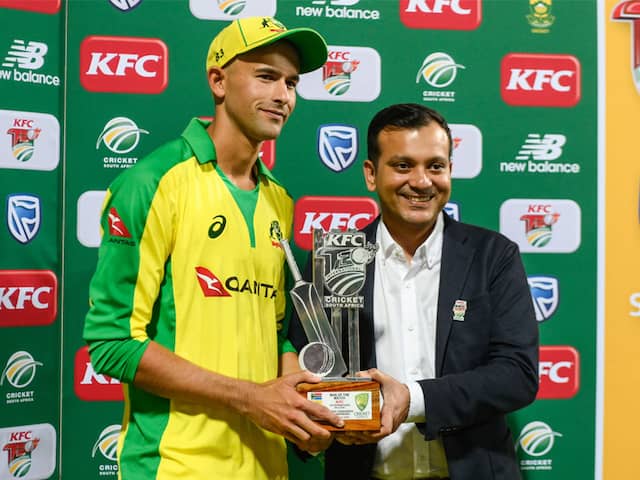 Australia registered a massive 107-run win over South Africa -- their heaviest defeat in the format -- in the first Twenty20 International (T20I) at The Wanderers Stadium, Johannesburg on Friday. The hero of Australia's huge win was all-rounder Ashton Agar who starred with both the bat and ball. While batting, Agar provided Australia with the much-needed acceleration towards the end, scoring 20 off just nine balls and then bowled brilliantly to return with figures of 5/24, including a hat-trick. However, before the South Africa series, Agar had an ordinary tour of India where he managed to take only two wickets in three One-day International (ODIs). After his match-wining performance, Agar revealed that having a chat with India all-rounder Ravindra Jadeja after the India series "filled me with confidence".

Agar also revealed that Jadeja is his "favourite player in the world" and he would like to emulate his performances on the field.

"He's my favourite player in the world - I want to play cricket like he does," Agar was quoted as saying by cricket.com.au at the post-match presentation.

Explaining the qualities that make Jadeja stand out from other all-rounders, the left-arm spinner said that he contributes in all three departments of the game -- be it batting, bowling or fielding, which makes him an "absolute rockstar".

"He's an absolute rockstar. He smacks them, gun fielder and spins the ball. But it's just his presence when he's out there, watching him filled me with confidence," Agar said, heaping praise on his favourite player.

"And just talking to him about spin bowling, (he said to) keep trying to spin the ball. When (he's) batting, he has a really positive attitude and he takes that attitude into the field as well. So I was pretty inspired by talking to him," he added.

The second T20I of the three-match series will be played at St George's Park, Port Elizabeth on February 23.

While Australia will look to seal the series, the hosts will look to keep it alive by winning the match and take it to the third match in Cape Town.

After the T20I series, both the teams will play three 50-over games which begins on February 29.

Ravindra Jadeja The Wanderers Stadium, Johannesburg Cricket
Get the latest Cricket news, check out the India cricket schedule, Cricket live score . Like us on Facebook or follow us on Twitter for more sports updates. You can also download the NDTV Cricket app for Android or iOS.