Shoaib Malik smashed his own stumps bringing an unfortunate end to his brisk 41 off 26. 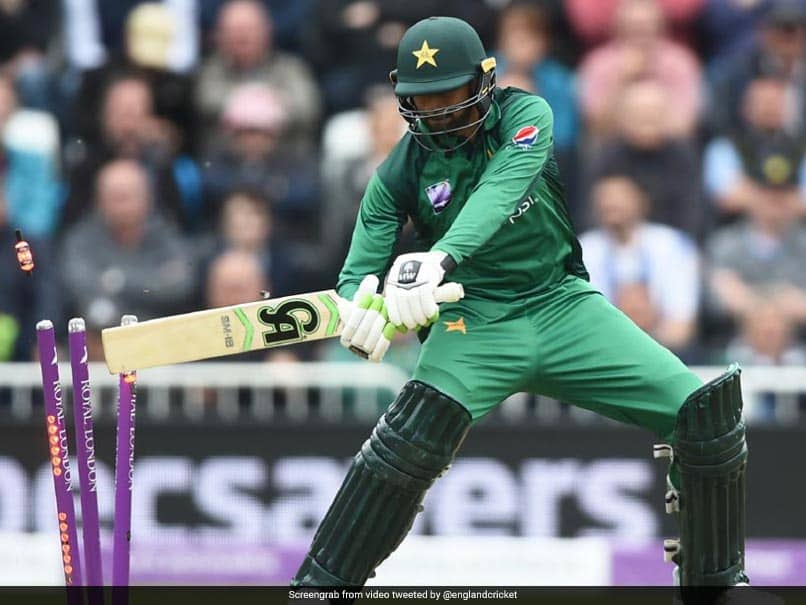 Shoaib Malik was attempting to master the art of late cut from way back in his crease.© Screengrab @englandcricket

Shoaib Malik, the Pakistan veteran, became just the eighth man to ever get out hit-wicket twice in one-day international (ODI) cricket. The exclusive club features greats of the game like Allan Border, Kumar Sangakkara and Malik's compatriot Misbah-ul-Haq. Malik, whose first hit-wicket dismissal came in 2003, rattled all his stumps during the fourth ODI against England at Trent Bridge on Friday. Malik was attempting to master the art of late cut from way back in his crease against fast-bowler Mark Wood. To the bowler's surprise, Malik smashed his own stumps bringing an unfortunate end to his brisk 41 off 26.

Soon, the video of the comic dismissal was posted on social media and there was no mercy shown to the senior cricketer.

Don't see this too often!

Wicket goes to who?

Hahahaha...hit wicket of the century...

Pakistan, only Pakistan can produce such gold comedy moments so frequently on the cricket field.

He is playing tennis

Shoaib Malik gets OUT hitting his own wickets

As far as the match is concerned, Ben Stokes's unbeaten 71 rescued England from a top-order collapse as the World Cup hosts and favourites beat Pakistan by three wickets with three balls to spare.

England also secured the five-match series at 3-0 up with one to play.

England were cruising to a target of 341 at 201 for one when Jason Roy's dismissal for 114 sparked a collapse that saw three wickets lost for seven runs in 10 balls.

And when Moeen Ali was out for a duck, England were 216 for five.

But Stokes steadied the ship with Tom Curran (31) and got England back on track in a stand of 61.

Earlier, Malik, who is married to Indian tennis star Sania Mirza, had returned home citing personal reasons and missed the T20I and the first three ODIs.

England Cricket Team Shoaib Malik Cricket
Get the latest updates on IPL 2020, check out the IPL Schedule for 2020 and Indian Premier League (IPL) Cricket live score . Like us on Facebook or follow us on Twitter for more sports updates. You can also download the NDTV Cricket app for Android or iOS.