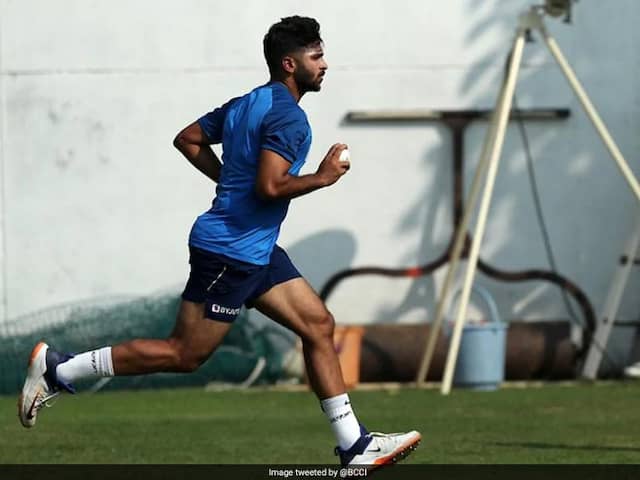 Pacer Shardul Thakur on Saturday became the first India cricketer to resume outdoor training after a two-month coronavirus-forced break. Thakur, who has featured in one Test, 11 ODIs and 15 T20s, hit a local ground at Boisar in Maharashtra's Palghar district along with some domestic players. The Maharashtra government has allowed opening of stadiums for individual training in green and orange zones without spectators. This was after the home ministry offered relaxation in restrictions for the fourth phase of the lockdown till May 31.

"Yes, we practised today. It was good and definitely pleasing to practice after two months," Thakur told PTI.

An official said that the Palghar Dahanu Taluka Sports Association started the net sessions at Boisar, which is around 110 kms away from Mumbai.

Strict safety protocols were followed, with each bowler getting his own set of disinfected balls.

"All the safety measures were followed. The bowlers got their own balls which were disinfected and temperatures of the players who came for practise were also checked," the official said.

Mumbai batsman Hardik Tamore, who made his Ranji debut for the domestic giants last season, was also seen training at the same ground.

"Due to our fantastic facility in Palghar district, we were able to facilitate much-needed training program to our esteemed players while adhering to social distancing norms and hygiene," he added.

All sporting action in the country has been halted since March 25, when the first nationwide lockdown, to stem the spread of the coronavirus outbreak, was announced by the central government.

Top cricketers like Virat Kohli and Rohit Sharma, who have resorted to home workouts to keep themselves fit during the lockdown, are still waiting to resume individual training.

Only India pacer Mohammed Shami has been able to train outside, in his own farm land.

On Thursday, England's Ben Stokes, Stuart Broad and Chris Woakes became the first set of cricketers to return to individual training at their local county grounds.

India Cricket Team Shardul Thakur Cricket
Get the latest Cricket news, check out the India cricket schedule, Cricket live score . Like us on Facebook or follow us on Twitter for more sports updates. You can also download the NDTV Cricket app for Android or iOS.