Hasan Ali is marrying Indian woman in Dubai on Tuesday and had tweeted a picture of himself on his "last night as a bachelor". 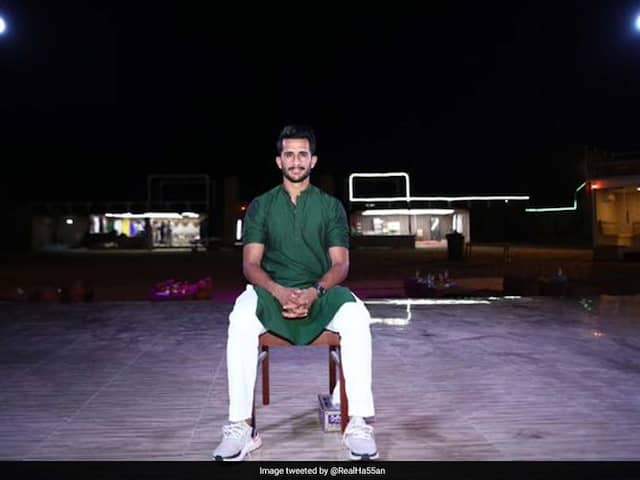 Hasan Ali tweeted a picture of himself, captioning it: "Last night as a bachelor".© Twitter

Some hours before his big day, Pakistan cricketer Hasan Ali took to Twitter and posted a picture of himself, captioning it: "Last night as a bachelor. Looking forward." Hasan Ali will marry an Indian woman Shamia Arzoo in Dubai on Tuesday, who as per reports is a flight engineer with Emirates Airlines. Replying to Hasan Ali's Twitter post, Indian tennis star Sania Mirza congratulated the Pakistan cricketer and made a special request. "Congratulations Hassan wish you both a lifetime of love and happiness .. this time you'll have to treat us to more than Nandos though," wrote Sania Mirza, who is married to Pakistan all-rounder Shoaib Malik.

Congratulations Hassan wish you both a lifetime of love and happiness .. this time you'll have to treat us to more than Nandos though https://t.co/CEXysWNv4F

There was a lot of speculation surrounding Hasan Ali's marriage to Shamia Arzoo. Last month, many reports had claimed that the Pakistan right-hand fast bowler was set to marry an Indian woman.

However, on July 30, Hasan Ali in a tweet, had said that the wedding is not confirmed yet and he will make a public announcement about it very soon.

Soon enough, Hasan Ali did make an announcement and ended all speculation.

"Our families wanted to keep this a low key affair but since the matter has come out in the media I have decided to make an official announcement to ensure there are no speculations surrounding my marriage," Hasan told a news conference in his hometown, Gujranwala (Pakistan).

"I will be wearing a black and red sherwani suit while she will be dressed in Indian style," Hasan Ali added.

Hasan Ali said he had met with Shamia one year ago in Dubai and their friendship had grown since that meeting.

However, his form and stock has plummeted in the past few years. The 25-year-old struggled at the World Cup in England and Wales and was dropped from the playing XI midway through the tournament.

Hassan Ali Sania Mirza Cricket
Get the latest Cricket news, check out the India cricket schedule, Cricket live score . Like us on Facebook or follow us on Twitter for more sports updates. You can also download the NDTV Cricket app for Android or iOS.