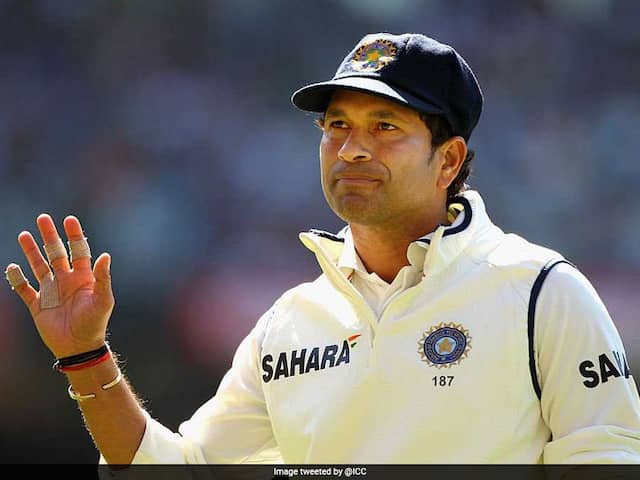 Indian cricket legend Sachin Tendulkar has been inducted into the International Cricket Council (ICC) Hall of Fame. Along with the batting icon, former South African fast bowler and two-time two-time World Cup-winning Australian woman cricketer Cathryn Fitzpatrick were also inducted into the ICC Hall of Fame, the world cricketing body announced. It is an honour to be inducted into the ICC Cricket Hall of Fame, which cherishes the contribution of cricketers over generations. They have all contributed to the growth and popularity of the game and I am happy to have done my bit," Sachin Tendulkar said at the induction ceremony held in London.

The 46-year-old former right-hand batsman is regarded as the greatest to have played the game along with Sir Donald Bradman and remains the top run-accumulator in both Tests and ODIs. He has 34,357 runs across formats and is the only batsman to have 100 internationals hundreds under his belt.

The term 'legend' doesn't do him justice. @sachin_rt is the latest inductee into the ICC Hall Of Fame.#ICCHallOfFame pic.twitter.com/AlXXlTP0g7

From one brilliant right-handed batsman to another.@MahelaJay congratulates @sachin_rt on his induction into the ICC Hall of Fame#ICCHallOfFame pic.twitter.com/vMVtPaYhxx

He thanked his family and coach, who has supported him in his journey in international cricket for close to two and half decades.

"On this occasion, I would like to thank all of those who were by my side over a long international career. My parents, brother Ajit and wife Anjali have been pillars of strength while I was lucky to have someone like coach Ramakant Achrekar as an early guide and mentor," the maestro said.

Tendulkar, the most prolific batsman in history, was inducted immediately after becoming eligible for induction, which requires that a player should have played his last international match at least five years before. The 46-year-old former right-hand batsman is regarded the greatest to have played the game along with Sir Donald Bradman and remains the top run-accumulator in both Tests and ODIs.

Tendulkar, who retired in November 2013, tallied 15,921 runs in Tests and 18,426 in ODIs, both of which remain records. He is the sixth Indian to be inducted into the ICC Cricket Hall of Fame.

"I am also thankful to all my captains, fellow players and the BCCI and the MCA administrators over the years for their support and for making me enjoy the game so much and for so long. I thank the ICC for this appreciation of my cricket career and I am happy to note that cricket continues to grow with three popular formats."

The 52-year-old Donald is one of the finest bowlers to have played the game and had 330 Test and 272 ODI wickets to his credit before calling it quits in 2003.

Fitzpatrick is the second highest wicket-taker of all time in women's cricket with 180 ODI scalps and 60 in Tests. As a coach, she guided the Australian women's team to three World Cup titles.

Sachin Tendulkar Allan Donald Cricket
Get the latest Cricket news, check out the India cricket schedule, Cricket live score . Like us on Facebook or follow us on Twitter for more sports updates. You can also download the NDTV Cricket app for Android or iOS.