Yuzvendra Chahal shares a good bond with Rohit Sharma and Ritika Sajdeh, and the three are often seen engaging in friendly banter on social media 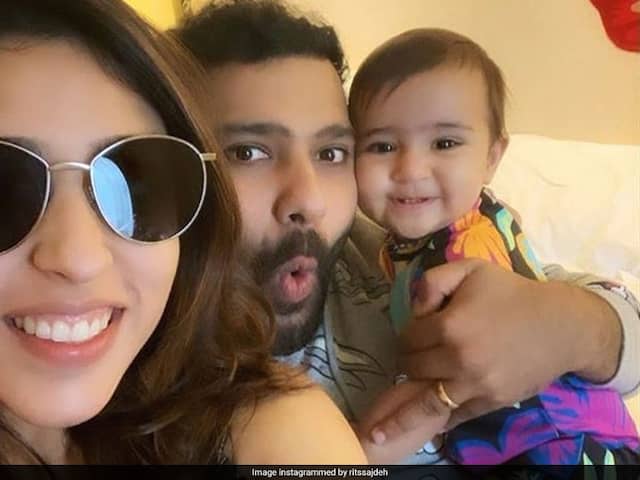 Yuzvendra Chahal engaged in some Instagram banter with teammate Rohit Sharma's wife after she shared a family picture on the social media site. Ritika Sajdeh posted a picture with Rohit Sharma and their daughter Samaira with the caption "Reunited". "Why u cropped me Bhabhi," Chahal commented on the photo, accompanied with a slew of emojis. "Your coolness was taking over the picture," Ritika said in response to the leg-spinner. The exchange between the two left fans in splits, with a few asking Chahal to stop being a "third wheel".

"Because you were being kabab mein haddi," one user wrote in response to Chahal.

"Stop being the third wheel Yuzi," wrote another user.

Chahal shares a good bond with Rohit Sharma and Ritika Sajdeh, and the three are often seen engaging in friendly banter on social media.

Once, when on holiday, Rohit Sharma had shared a photo of himself. "Miss you Rohitaaaa sharaaammmaaa," Chahal replied. To Chahal's comment, Ritika came up with a hilarious reply and said: @yuzi_chahal23 he's mine now."

A few days later she also tweeted a birthday wish to the spinner.

"Happiest birthday @yuzi_chahal ! I'm sure you miss @ImRo45 today but I'll have him back to you in no time," she tweeted to him in July last year.

Rohit Sharma is currently with the India team preparing for the 3rd T20I match against South Africa. India have a 1-0 lead in the series going into the final game, having comfortably chased down 150 in the second match in Mohali.