Pakistan vs Sri Lanka: Pakistani fan took to Twitter to reach out to Virat Kohli and convey his love for him and request him to play in Pakistan. 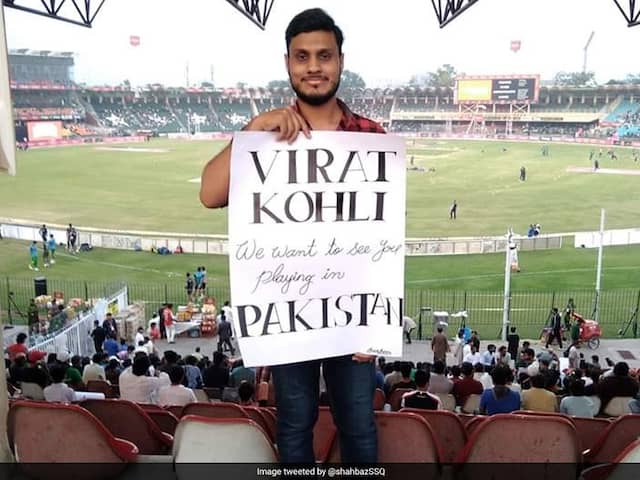 Virat Kohli enjoys a big fan following not just in India but outside the country as well. Apart from loving his batting style, people love his personality and dedication towards the game, with many even considering him to be their role model. While this is a common trait found in every Indian cricket fan who is a big admirer of Virat Kohli, not many expect a Pakistani fan to be a big fan of the India skipper, especially because the two nations are arch-rivals. Shattering this notion, one Pakistani took to Twitter to reach out to Kohli and convey his love for him. He shared a picture where he is holding a poster with a special request written on it for Kohli. "Virat Kohli we want to see you playing in Pakistan," the poster read.

"@imVkohli we are hoping you to come Pakistan and play cricket here also. We love you I am big fan of you. Lots of love  and strength from  #PakVsSri #Lahore #Pakistan," the user wrote along side the picture.

The post attracted several comments while some users echoed the same sentiments others were not very happy with the idea and posted some negative comments.

Hope one day it will happen

I can understand your feelings and respect, but until and unless you will not stop terrorism it's impossible

Lol they don't want to be bombed by terrorist

Pakistan vs Sri Lanka limited-overs series marked the return of international cricket to the South Asian nation. It was a momentous occasion for the Pakistani fans as they have not seen their team play international matches at home on regular basis.

Pakistani team also did not disappoint their fans as they clinched the ODI series 2-0, after the first match was washed out.

However, the home players failed to produce the same performance in the shortest format of the game and lost the series, with one game left.

In the final match of the tour, Pakistan restricted Sri Lanka for 147/7. However, the hosts faltered in their chase and managed only 134/6 in 20 overs, losing the match by 13 runs. Sri Lanka won the series 3-0.

Sri Lanka Cricket Team Gaddafi Stadium, Lahore Cricket
Get the latest Cricket news, check out the India cricket schedule, Cricket live score . Like us on Facebook or follow us on Twitter for more sports updates. You can also download the NDTV Cricket app for Android or iOS.