World No.1 Pakistan suffered a humiliating T20I series loss to Sri Lanka at home and the fallout has been quite severe. 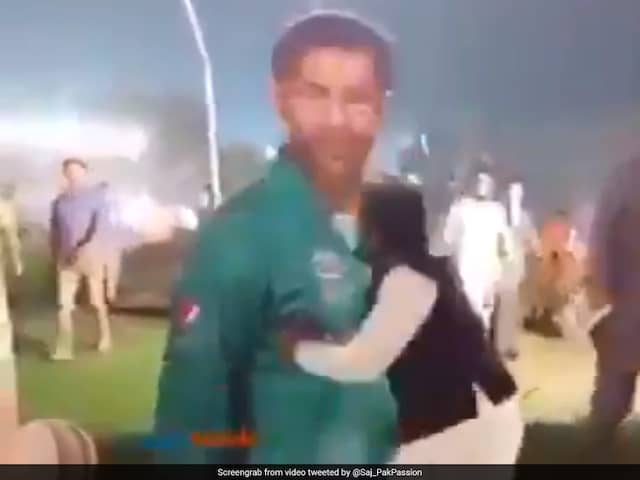 Pakistan vs Sri Lanka: A cut-out of Sarfaraz Ahmed was completely destroyed by an angry fan.© Twitter

Pakistan, World No.1 in Twenty20 Internationals (T20I), suffered a humiliating series loss to Sri Lanka at home on Wednesday. The fallout of the 3-0 whitewash for Pakistan has been severe. After the series loss, Pakistan head coach and chief selector Misbah-ul-Haq and skipper Sarfaraz Ahmed had to answer some serious questions. Now, a video has emerged where an angry fan is seen completely destroying a life-size cut-out of Pakistan captain Sarfaraz Ahmed. The fan is captured on the video, which has gone viral on Twitter, kicking and punching Sarfaraz's cut-out, and finally disfiguring it.

Here is the video that is doing the rounds on social media:

A fan not happy with Sarfaraz Ahmed after the 3-0 loss to Sri Lanka #PAKvSL #Cricket pic.twitter.com/S6Biri8z4f

Pakistan's humiliation was all the more surprising as Sri Lanka's -- their first-ever Twenty20 series whitewash -- was achieved despite missing 10 of their top players, including regular Twenty20 skipper Lasith Malinga, who refused to tour Pakistan over security fears.

The visiting Sri Lankans were thrashed 2-0 in the one-day series but staged a remarkable comeback to hand Pakistan only their second T20I whitewash -- the first one coming against England in United Arab Emirates in 2015.

On Wednesday, chasing a modest 148-run target, Pakistan were on course for victory with Haris Sohail's 50-ball 52 with four boundaries and a six but leg-spinner Wanindu Hasaranga turned the tables with 3-21 to restrict Pakistan to 134-6 in 20 overs.

Hasaranga had Sohail stumped in the 16th over and then dismissed Pakistan skipper Sarfaraz Ahmed (16-ball 17) in the 18th to give Sri Lanka victory on a match day designated as Pink Day for breast cancer awareness.

Oshada Fernando struck a brilliant 48-ball 78 with three sixes and eight boundaries -- the highest by a Sri Lankan player on T20I debut -- to lift Sri Lanka to 147-7 in their 20 overs.