Shoaib Malik smashed an unbeaten half-century as Pakistan overhauled a modest 142-run target in 19.3 over to take a 1-0 lead in the three-match series. 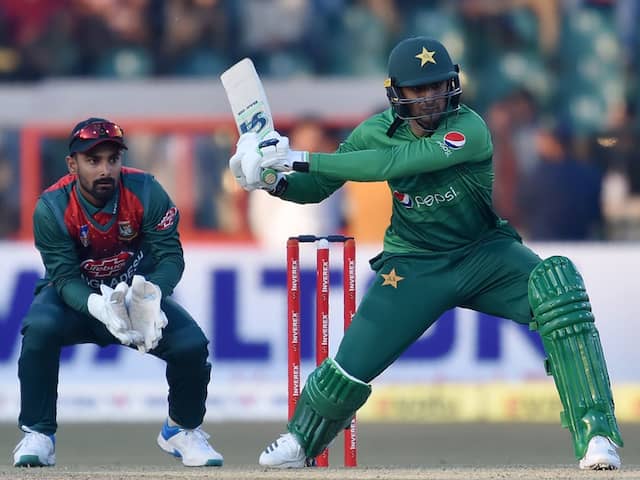 Recalled Shoaib Malik smashed a solid half-century to anchor Pakistan's five-wicket win over Bangladesh in the first Twenty20 international in Lahore on Friday. Malik's 45-ball 58 not out for his eighth Twenty20 fifty as Pakistan overhauled a modest 142-run target in 19.3 over to take a 1-0 lead in the three-match series. Bangladesh had managed 141/5 in their 20 overs with openers Mohammad Naim scoring 41-ball 43 and Tamim Iqbal hit 34-ball 39 as Pakistan's three-man pace attack kept them in check on a flat Gadaffi stadium pitch. The win further consolidated Pakistan's chances of hanging on to their world number one ranking in the shortest format. If they lose any of the remaining matches -- on Saturday and Monday, also in Lahore, Australia will replace them at the top.

Lahore's foggy weather prompted Pakistan Cricket Board to start the match at 2pm (0900 GMT) but it failed to attract more than 10,000 people in a capacity of 24,000 stadium.

Bangladesh could not put a reasonable fight as Pakistan won their first match after losing six of their last seven T20 matches with one washed out.

"It's tough to be in and out of the team but I have been playing leagues and domestic cricket and that helped me stage a comeback in this match.

"I am happy to help achieve this win in a chase."

But Pakistan's chase was initially jolted when they lost world number one Twenty20 batsman Babar Azam on only the second ball into their innings, caught behind off an inside edge off fast bowler Shafiul Islam.

Shafiul was the best Bangladeshi bowler with 2/27.

Another recalled batsman Mohammad Hafeez hit three crisp boundaries and was looking in good touch before he miscued a flick and was caught off Mustafizur Rahman for 17.

Malik and Ahsan took Pakistan to 81 and before Iftikhar Ahmed (16) added a further 36 for the fourth wicket but even the fall of Iftikhar and Imad Wasim (six) did not derail Pakistan.

Earlier, Bangladesh, who won the toss and opted to bat, were off to a good start as Iqbal and Naim put on 70 for the opening wicket.

Iqbal was run out in the 11th over while Naim holed out off spinner Shadab Khan in the 15th.

Skipper Mahmudullah hit two boundaries in his 14-ball 19 not out.

Shoaib Malik Cricket Pakistan vs Bangladesh, 1st T20I
Get the latest updates on IPL 2020, check out the IPL Schedule for 2020 and Indian Premier League (IPL) Cricket live score . Like us on Facebook or follow us on Twitter for more sports updates. You can also download the NDTV Cricket app for Android or iOS.