Mitchell Starc managed to get a delivery to hit the bat, both pads and then the stumps as he claimed a wicket in a Sheffield Shield match. 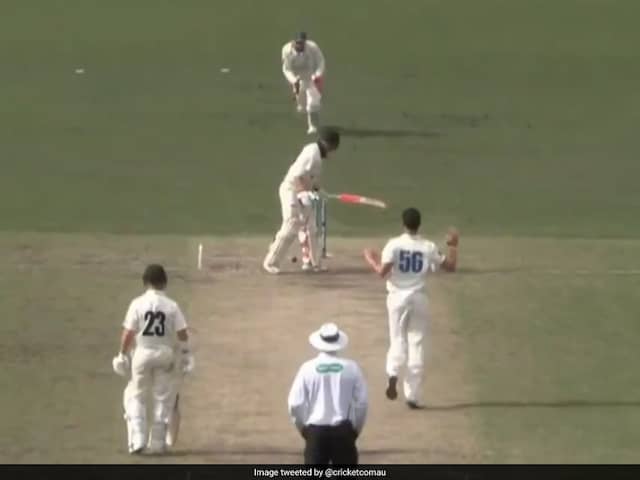 Mitchell Starc struck in the 14th over to give New South Wales a breakthrough.© Twitter

Mitchell Starc took social media by storm after one of his videos while dismissing Josh Philippe of Western Australia during a Sheffield Shield match in Sydney went viral on Tuesday. Looking like absolute magic, Mitchell Starc's sharp delivery took an inside edge of Josh Philippe's willow before hitting the batsmen on both his pads and knocking off the bails. "Off the bat, both pads, and onto the stumps! Starc somehow gets through the gate of Philippe," Cricket.com.au captioned the video of Mitchell Starc's impressive delivery on Twitter.

Off the bat, both pads, and onto the stumps!

Starc somehow gets through the gate of Philippe.

Acknowledging the incredible incident, the International Cricket Council (ICC) shared the video and asked: "What kind of sorcery is this, Mitchell Starc?"

What kind of sorcery is this, Mitchell Starc?pic.twitter.com/Trd5Lo7anC

Starc struck in the 14th over to give New South Wales a breakthrough in the 10th Match of the Marsh Sheffield Shield in Sydney.

While Philippe lost his wicket for 15 runs, Western Australia managed to score 85/1 before stumps on Day 2 with D'Arcy Short and Shaun Marsh unbeaten on 39 and 25 respectively.

Earlier, New South Wales rode on a century by Steve Smith and a noteworthy 91-run knock by Moises Henriques to post 444/8 before declaring their innings.

With 103 runs off 295 balls, including nine boundaries and two sixes, Smith recorded the slowest-ever century of his first-class career.

The former Australia captain lost his wicket while trying to play an upper-cut off a Marcus Stoinis bouncer.

Henriques, on the other hand, scored a 116-ball 91 and decorated it with 12 boundaries and two sixes.

Daniel Hughes, Daniel Solway and Pat Cummins contributed with a half-century each in NSW's confident total.