Andrew Strauss believes that if Eoin Morgan decides not to carry on as the leader of the group, Jos Buttler can replace him at the helm. 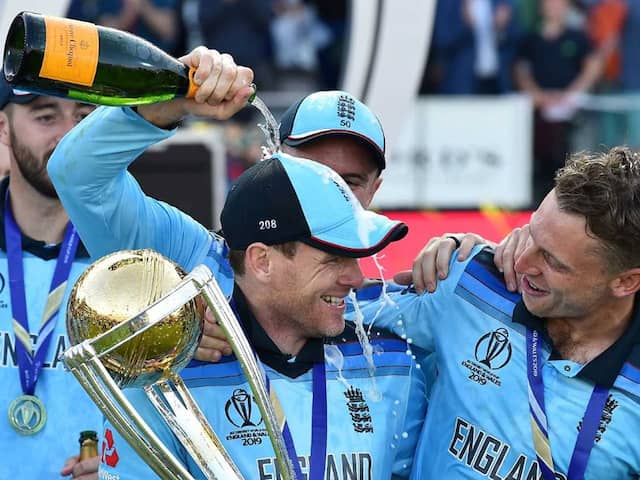 Jos Buttler scored an important knock of 59 in the final at Lord's against New Zealand.© AFP

England lifted their maiden World Cup after edging past New Zealand in a thriller at Lord's on Sunday. England were knocked out in the group stages of the previous World Cup, but four years later, they have turned their fortunes around under the leadership of Eoin Morgan. After England's World Cup triumph, England cricket's former team director Andrew Strauss said that if Morgan decides that he doesn't want to carry on as the leader, Jos Buttler is a likely replacement in the limited overs format.

"I think Jos is an outstanding cricketer and outstanding person, he reads the game very well. So if there is a vacancy, he is going to be a very strong candidate," Strauss was quoted as saying by ESPN Cricinfo.

Strauss further said that skipper Eoin Morgan by winning the ICC Men's Cricket World Cup has climbed the Everest and it is up to him to decide whether he continues in his role.

"The question for him is what he wants to achieve here because he has climbed Everest. That is the question for all the players, because we have made mistakes in the past. We've won Ashes series and got to No.1 in the world and thought that was the end in itself. I certainly hope that what he is doing right now, unless he is absolutely clear he wants to carry on, is just taking a bit of time to reflect where he is at. To stay on as captain he needs to be driven and motivated to push people on as he has done over the last four years and if he has the bit between his teeth then we've seen just what a fantastic leader he is," Strauss added.

Morgan has successfully turned around the fortunes of England cricket team. The side was knocked out of the World Cup 2015 in the group stages, but four years later, the team has won the World Cup for the very first time in its history.

Strauss was appointed as the team director in 2015 and he said it was hurtful to see the side's performance in the 2015 Cricket World Cup.

"I was watching the last World Cup, and I was genuinely angry about what I'd seen. Not because of anything those guys were doing, but the same mistakes made in the two previous World Cups that I'd been involved in, and prior to my time as well, were being made again: playing the wrong brand of cricket, picking Test players and hoping they'd put some of the best one-day players in the world under pressure," Strauss said.

"Once I was appointed the director of cricket, it was a case of well, if we're going to prioritise one-day cricket, what do we need? If we want to play that type of style, who is the right captain to embody that," Staruss added.

The former England skipper Strauss said that 2015 World Cup debacle led him to see Morgan as the skipper. Strauss added that Morgan has never been afraid to do the things in his own way.

"That led me very quickly to Eoin Morgan. He has always been a guy who hasn't been afraid to do things his own way and to stick out from the crowd. He always had a very strong friendship with Brendon McCullum and instinctive desire to want to play that high tempo cricket. You can't force anyone to do that, it's got to be very comfortable with them. So it was natural that he would carry on, he added.

England scripted history on Sunday by claiming their first-ever World Cup title. The finals will be remembered for ages as it did not have a winner after the 50-over and super over action both ended in a tie.

In the end, England were announced as the winner as they had hit more boundaries - 26 - as compared to New Zealand's 17 boundaries in the match.

New Zealand had set up a target of 242 for England to win the World Cup. As the hosts needed nine runs off three balls, Stokes hit the ball into the deep off Trent Boult and ran for a double. New Zealand's Martin Guptill threw the ball in an attempt to run out Stokes but the ball bounced off Stokes' bat and reached the boundary. As a result, England were awarded six runs - two for a double and four for an overthrow.

Jos Buttler
Get the latest updates on IPL 2020, check out the IPL Schedule for 2020 and Indian Premier League (IPL) Cricket live score . Like us on Facebook or follow us on Twitter for more sports updates. You can also download the NDTV Cricket app for Android or iOS.