Ahead of the game, Roy had to spend the entire night in hospital with his wife because of his daughter's illness and was sleep-deprived before the match. 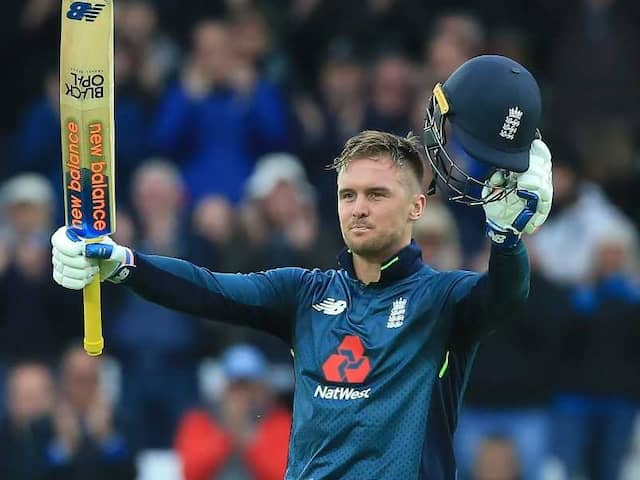 Jason Roy won man of the match award for his 89 ball 114, which included 11 fours and four sixes.© AFP

Jason Roy, whose century helped England chase down Pakistan's total of 340 in the fourth one-day international (ODI) of the five-match series on Friday, termed his match-winning innings as "special" as it came in most-trying circumstances. The England opener had to spend the entire Thursday night in hospital due to his daughter's illness and could only take two hours sleep before rushing to the ground ahead of the match. Roy's superb 114 was the centrepiece of England's chase as they beat Pakistan by three wickets at Trent Bridge to go 3-0 up in the series.

Ahead of the game, Roy had to spend seven hours in hospital with his wife because of his daughter's illness and was sleep-deprived before the match.

But he showed no sign of fatigue while he was batting. In fact, he was so sharp in the field that he saved a six at the long off boundary with his acrobatic effort.

"I had a bit of a rough morning so this one is a special one for me and my family," Roy told BBC Radio.

"It was my little one. We had to take her to hospital at 1:30 in the morning. I stayed there until 8:30am, came back for a couple of hours sleep and got to the ground just before warm-up and cracked on," Roy explained.

Roy was awarded man of the match for his 89 ball 114, which included 11 fours and four sixes.

The hosts England will begin their World Cup 2019 campaign against previous edition's semi-finalist South Africa on May 30 at The Oval in London.

Trent Bridge, Nottingham
Get the latest Cricket news, check out the India cricket schedule, Cricket live score . Like us on Facebook or follow us on Twitter for more sports updates. You can also download the NDTV Cricket app for Android or iOS.