England's intra-squad practice game gave fans a glimpse of what to expect when international cricket resumes next week. 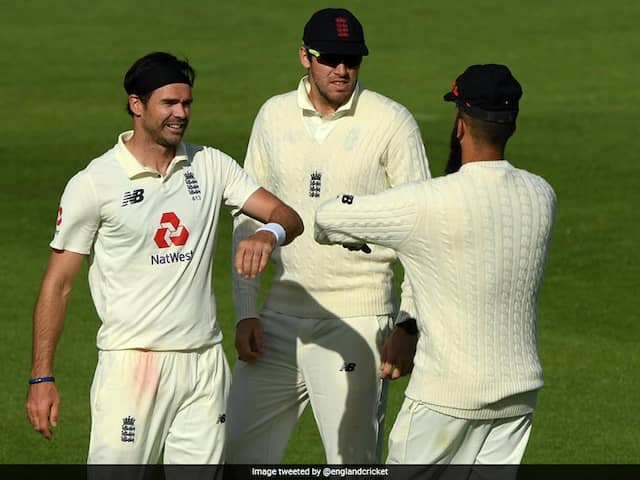 England's intra-squad practice game ahead of the three-Test series against the West Indies gave cricket fans a glimpse of what all to expect once the action resumes next week at Southampton. Ben Stokes, who will captain England in the absence of regular skipper Joe Root, captained a side while wicketkeeper-batsman Jos Buttler led the other team. On the first day of the intra-squad game, James Anderson found his rhythm straightaway as he bowled 18 overs and picked up two wickets.

Anderson trapped Joe Denly right in front of the stumps with a sharp in-swinger to pick up his first wicket.

Cricket is back and @jimmy9 is taking wickets!

The 37-year-old removed Dan Lawrence for 58 as the right-handed batsman flicked the ball straight to Jamie Overton.

England Cricket's official Twitter handle posted some pictures in which Anderson along with other players were seen following the new International Cricket Council's guidelines amid the ongoing coronavirus pandemic.

"It's different, but it's back," England Cricket captioned the pictures on Twitter.

It's different, but it's back pic.twitter.com/DKFQxRZRam

In the practice match, Jos Buttler's side, after being put in to bat, declared their innings at 287 for five.

James Bracey, 23, was the top run-getter with a knock of 85. Buttler and Sam Curran were unbeaten on 24 and 15 respectively at the end of first day's play in the ongoing three-day game.

On Wednesday, substitute fielder Amar Virdi came out with drinks and even he was seen wearing gloves as a precautionary measure to reduce the possibility of players contracting the deadly coronavirus.

The first Test match since the coronavirus-enforced break is set to begin on July 8.

The West Indies will play three Tests and three Twenty20 Internationals in England. However, no spectators will be allowed for any of the matches as every game will be played behind closed doors.