Ajinkya Rahane comes to Delhi Capitals while Rajasthan Royals get the services of Rahul Tewatia and Mayank Markande. 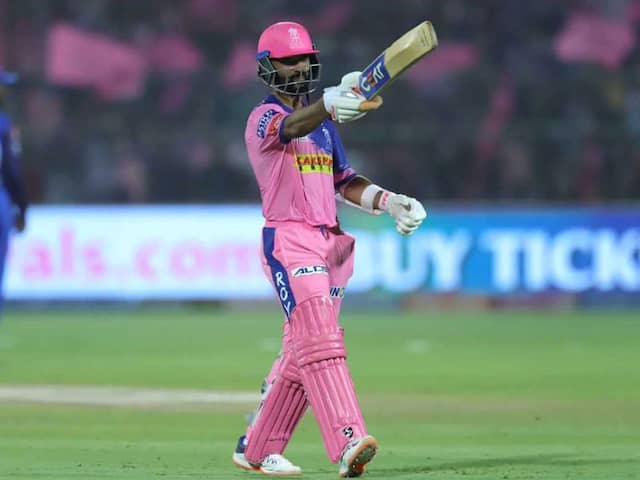 Ajinkya Rahane is set to join Delhi Capitals ahead of the Indian Premier League (IPL) 2020 edition as Delhi Capitals completed the trade from Rajasthan Royals, releasing spinners Rahul Tewatia and Mayank Markande to the Jaipur-based T20 franchise. Delhi Capitals co-owner Parth Jindal said in a statement that his team is "extremely honoured to welcome" Ajinkya Rahane, adding that with the recent two signings will "help Delhi Capitals go a long way in IPL 2020".

"Rahul and Mayank are both extremely talented cricketers with a bright future ahead of them. I am confident they will excel at Rajasthan Royals," Jindal said.

"I am also extremely honoured to welcome one of India's most stellar and consistent batsmen, Ajinkya Rahane, to the DC family. When the franchise underwent a revamp last year, a decision was made to keep Indian players at its core. The result was there for everyone to see, with the likes of Shikhar Dhawan and Ishant Sharma performing brilliantly for us, and complimenting the youth that DC has in Rishabh Pant, Shreyas Iyer and Prithvi Shaw, among others," he added.

Besides Suchith, KXIP had also asked Delhi for New Zealand pacer Trent Boult as part of the Ashwin trade-off but that did not materialise.

"That thought process has continued for us this time around as well, as is evident in the signing of Ravichandran Ashwin, followed by that of Ajinkya Rahane. I am sure Rahane's wealth of experience, and familiarity with the conditions will help Delhi Capitals go a long way in IPL 2020," Jindal explained further.

Rajasthan Royals also traded fast bowler Dhawal Kulkarni back to Mumbai Indians. Kulkarni represented Mumbai Indians from 2008 to 2013. He played 33 matches for Mumbai Indians and is ninth on the list of MI's leading wicket-takers with 36 wickets.