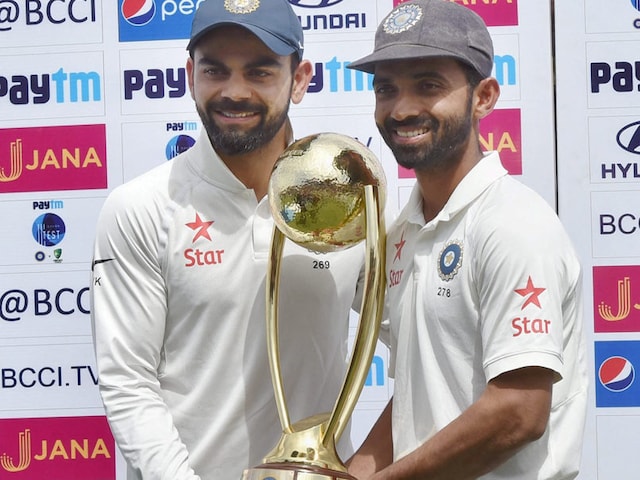 Former Australian fast bowler Mitchell Johnson continued to take pot shots at Virat Kohli after India clinched the four-match Test series 2-1 on Tuesday. The win helped the hosts reclaim the Border-Gavaskar Trophy for the first time since 2012-13 after the riveting series came to an end in Dharamsala. The left-arm pacer, who will join the Mumbai Indians squad for their ongoing preparatory camp for the upcoming season of the Indian Premier League (IPL), took to Twitter to launch his latest attack.

Rahane should stay captain! It was a tough series but I believe it should stay on the field with the players https://t.co/jtM7V9eIAm

Johnson's remarks were in response to Kohli's comments during the press conference post the Dharamsala decider.

It seems Virat Kohli and the Aussies are no longer mates: https://t.co/BuY7TAy2X6 #INDvAUS pic.twitter.com/51cc7C1BKC

Asked after the end of match if he still considered Steve Smith's men as friends, as he had said at the start of the series, Kohli gave a very definite answer.

The India captain, who had to sit out of the fourth and final Test due to a shoulder strain, was a constant target for the Australians during the series, especially after the Bengaluru 'brain fade' controversy.

He was also in the thick of things with former players questioning his attitude and intentions with a section of the Australian media comparing the Delhi-born to United States President Donald Trump.

Things did not improve at any time during the series with Kohli's shoulder injury in Ranchi and Murali Vijay's catch off Josh Hazlewoood in Dharamsala, all becoming issues.

The Mumbai franchise picked Johnson for his base price of Rs.2 crore in IPL auction held in February.