"Want To Focus On The T20 World Cup And Win That," Says Hardik Pandya

Hardik Pandya said that the rest after the World Cup helped him focus on his cricket and work on fitness. 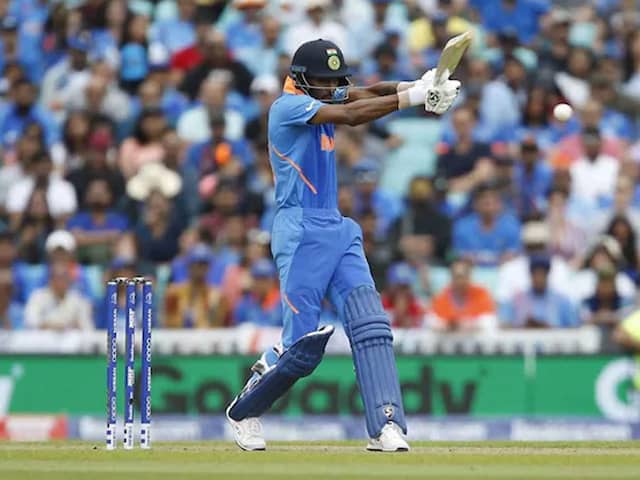 Hardik Pandya is gearing up for the upcoming home series against South Africa, starting September 15. Hardik was seen sweating it out in the nets, preparing for return to international cricket after a two-month long break. After a gruelling net session, the 25-year-old in an exclusive interview with IANS revealed that the team has moved on from semi-final exit from the World Cup and are eyeing to do well in the upcoming T20 World Cup, which is scheduled to take place in Australia in 2020.

"It was difficult and we all felt the same pain, but life moves on. I would have been more upset if we as a team hadn't done justice to our performance. I think as a team we played as champions and except for those 30 minutes, I thought we played outstandingly and everyone was contributing and looking to excel. It is just how it is at the knockout stage. We have kind of moved on and we want to focus on the next World Cup (WT20) and win that," he said.

India are scheduled to play a three-match Twenty 20 International series against South Africa at home after which they will continue their campaign at the World Test Championship with a three-Test series against the same opponents.

Asked if he has any specific goals going into the series against South Africa, Pandya said he believes in magic.

"To be honest, I don't keep goals because I let something out of the box happen. I just focus on preparing well and focus on the areas I wish to work on. I think that magical things do happen. So, I let my game speak and go with the situation. You never know when my team is down and I might stand up and do something special. I focus on that. South Africa is a good team and a good series will give us momentum in T20s," he smiled.

Hardik Pandya was rested for the full tour of the West Indies after the World Cup and the all-rounder mentioned that he used that time to attain full-fitness and worked towards enhancing his game.

"It was important for me (the break) as the IPL was long and then the World Cup followed and I had a good run in both the tournaments. So, I was looking to give it my best and that required my body to take some rest as precaution is better than cure and that is when the call was taken by the team management that I come back fully fit for the South Africa series," he added.

"Neither the team management nor I wish that I get injured. The rest has helped me a lot and my fitness has gone to the next level. I started doing pilates and that has helped me a lot. This isn't something very usual between cricketers. So, that is why I wanted to see how it works and it has worked really well. This last one month, I trained twice a day. It was important that I try something new to improve my back. It was important for me and my game to take this break," he added.

But then, coach Ravi Shastri and skipper Virat Kohli call him the X-factor in this team of youngsters. How does that feel?

"When someone like your captain and coach backs you, the confidence increases and you look to express yourself and that brings out the best in you. I have always made sure that I understand the situation and then enjoy myself. Enjoying the game decreases the pressure. I have confidence in myself so there is no question of pressure," Hardik Pandya said.

"The captain and coach expect me to do well and that gives me confidence because that means I have done something nice in my short career. It is always important to go out and enjoy yourself because at the end of the day it is a sport and I love the sport," he concluded.

Hardik Pandya India vs South Africa, 2019 Cricket
Get the latest Cricket news, check out the India cricket schedule, Cricket live score . Like us on Facebook or follow us on Twitter for more sports updates. You can also download the NDTV Cricket app for Android or iOS.