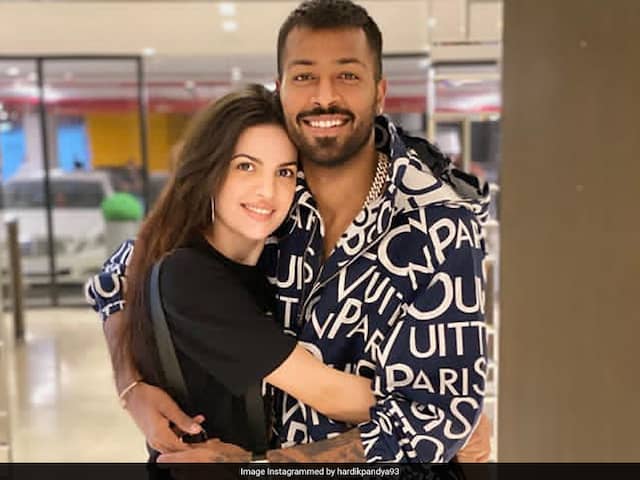 Hardik Pandya, who is recovering from a back injury, charmed his fans on Instagram by posting a loved-up photograph with his fiancee Natasa Stankovic on Friday. The 26-year-old Indian all-rounder captioned the picture with a red heart emoji. While fans flooded Hardik Pandya's adorable post with heart-warming messages, Indian tennis ace Sania Mirza stood out with a comment comprising heart eyes emojis. Recently, Hardik Pandya failed the fitness test and missed out on a place in squads for T20 Internationals and One-day Internationals in New Zealand.

Pandya last played for India in September, 2019, and will now have to play at least one domestic game for Baroda before being considered for a national comeback.

After the ongoing six-week-long New Zealand tour, India will host South Africa for a three-match ODI series in March.

On January 1, Pandya had announced his engagement with Serbian actress Natasa Stankovic on social media.

Pandya had shared the news with a few pictures and a video on Instagram, saying: "Mai tera, Tu meri jaane, saara Hindustan. 01.01.2020 #engaged."

The cricketer-actor pair never fails to charm their fans with lovable pictures and wishes for each other on social media.

On January 14, Pandya had poured in love when Natasa shared a throwback beach picture on Instagram. He had commented with a red heart emoji.

Earlier, Natasa had shared an adorable selfie with fiance Pandya on her Instagram story.

The Serbian actress took a candid click of Pandya, who is looking away from the camera, and shared it on her story, tagging Ed Sheeran's popular song "Photograph".

The couple has been making headlines ever since Pandya announced his engagement to Natasa, which caught many by surprise.