Faf du Plessis' hilarious response, when asked why Hardus Viljoen was not part of the playing XI of Paarl Rocks, left the match presenter in splits. 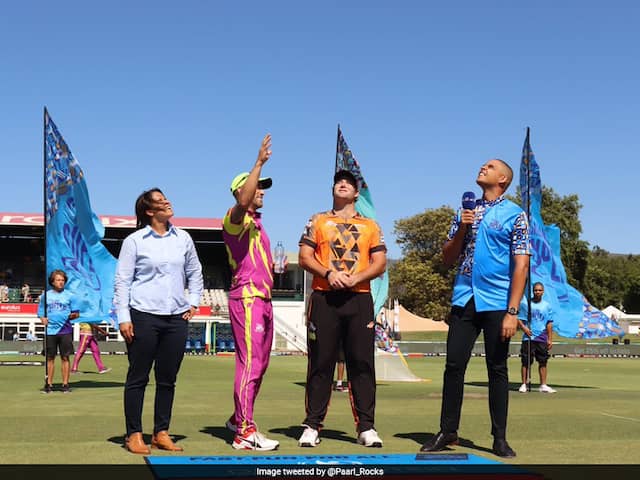 Paarl Rocks captain Faf du Plessis displayed his humorous side after losing a toss against Nelson Mandela Bay Giants in the Mzansi Super League 2019 clash on Sunday. When asked why Hardus Viljoen was not included in the playing XI, Faf du Plessis said, "Viljoen is not playing today because he's lying in bed with my sister as they got married yesterday". His honest remark left the match presenter in splits, who could not stop laughing. Hardus Viljoen was engaged to Rhemi Rynners, sister of Faf du Plessis in April 2019. He recently tied the knot with her.

In absence of Viljoen, who has not been consistent with his performance, Paarl Rocks won the match by 12 runs. Du Plessis scored 22 runs off 19 balls as his side scored 168/5 in the stipulated 20 overs.

In response, Nelson Mandela Bay Giants managed to score 156/6, with Heino Kuhn top scoring with 58 runs from 43 deliveries. Ferisco Adams was the pick of the bowlers for Paar Rocks as he returned figures of 3/36.

By the virtue of the victory, Paarl Rocks maintained their top spot in the points table with 27 points from 10 matches. Nelson Mandela Bay Giants also have identical points but Paar Rocks lead the points table due to superior net run rate.

Faf du Plessis Hardus Viljoen Cricket
Get the latest Cricket news, check out the India cricket schedule, Cricket live score . Like us on Facebook or follow us on Twitter for more sports updates. You can also download the NDTV Cricket app for Android or iOS.