ENG vs WI Cricket Highlights: Shannon Gabriel was the pick of the bowlers for the West Indies as he picked up three wickets. 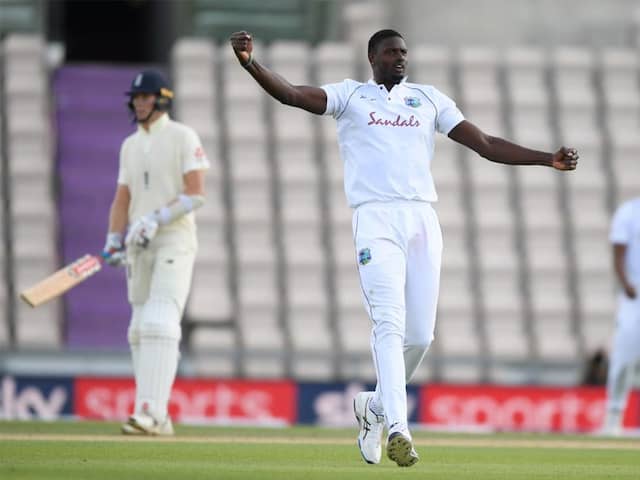 ENG vs WI: Jason Holder once again got rid of his counterpart Ben Stokes.© AFP

Shannon Gabriel and Alzarri Joseph brought the West Indies back in the game as they picked two wickets apiece in the final session to restrict England to 284/8 at stumps on Day 4 in Southampton.The late flurry of wickets began when Jason Holder removed his counterpart Ben Stokes once again in the match who fell four short of his fifty. Before that, Zak Crawley (76 runs) and Ben Stokes (46 runs) dominated the play taking England's lead past three-digit mark. Crawley completed his half-century with a reverse-sweep shot off Roston Chase's bowling. Stokes once again led from the front and played some exquisite drives on either sides of the wicket. Earlier, England openers Rory Burns and Dom Sibely dominated the morning session and kept the West Indies bowlers at bay for the majority of the session. The duo batted sensibly without taking too much risks and added 72 runs for the opening wicket. The only setback for the hosts in the morning session came when Burns lost his patience and threw his wicket away just a few overs before the lunch. After that, Joe Denly and Zak Crawley stitched a small partnership but Denly, like Burns, gifted his wicket and got out for 29 runs. (SCORECARD)