ENG vs IND: India travel to UK this year for a five-match Test series vs England. 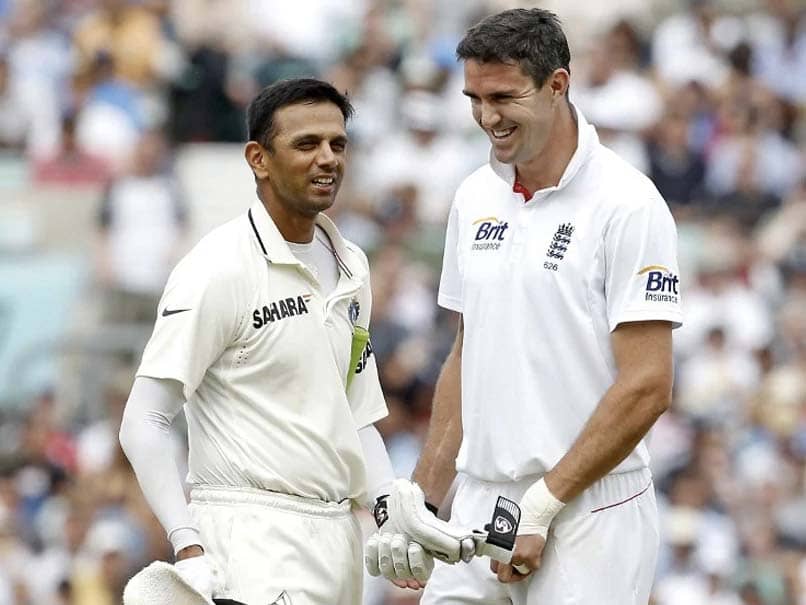 Rahul Dravid and Kevin Pietersen during a match between India and England.© AFP

Former India skipper Rahul Dravid on Sunday said that the Virat Kohli-led side has a very good chance of winning the Test series in England. India and England are slated to face off in a five-match Test series in UK this year. The series would commence in August, and India is also slated to square off against New Zealand in the finals of the World Test Championship (WTC) in June. "I really do think India have a very good chance this time. There's no question about England's bowling. Whatever bowling attack England put on the park, especially their seam-bowling attack, is going to be fantastic. They have a lot of players to pick and choose from and that's going to be terrific," Dravid said in a webinar organised by Live Aid India, a trust to help those affected by Covid-19, as reported by ESPNcricinfo.

"But if you look at their top six or top seven, you really think of one great batsman, a world-class batsman who is Joe Root. Obviously, Ben Stokes is another one, who is a good all-rounder, but for some reason Ravichandran Ashwin seems to do well against him. And that should be an interesting contest. I know he's done well against Stokes in India, but it'll still be an interesting subplot to the series," he added.

Dravid also said that Kohli's side would be well prepared for the Tests against England and he also opined that a lot of players in the squad have the much-needed self-belief.

"But I just think India will be well-prepared, have the confidence from Australia, there's lot of belief in the squad. A couple of players have been to England a few times, there's a lot of experience in the batting order this time around, so this is probably our best chance, maybe say 3-2 to India. I think India will play really well in England this time. It's a great opportunity we've got. After the WTC final, they're going to be in England for a whole month before the Test series starts. I don't think any team has had that kind of time to prepare for a Test series as India will have this time, so that surely should be a great advantage," said Dravid.

Talking about India's squad for the WTC final and five-match Test series against England, Dravid said: "It does seem balanced. It's a 20-member squad. The only other one who could have merited selection would've been Kuldeep Yadav, but he's fallen away over the last little bit. Also, with the kind of recent performances from Axar Patel, Ravindra Jadeja and Washington Sundar, they're clear about the kind of balance they want in the squad."

"With both Ashwin and Jadeja adding value with the bat and having like-for-like replacements in Axar and Washy, they're clear about the direction they want to take. It lengthens their batting and all four finger spinners here allows them to do that. The make-up of the squad tells me they know their best XI even before they leave from here."

When asked whether both Ravichandran Ashwin and Ravindra Jadeja could find a place in the playing XI, Dravid said: "Yeah, why not? I mean, India has had success with that kind of line-up and especially with the way Ashwin and Jadeja have been batting at the moment, it gives them the best all-round balance. Once Hardik Pandya couldn't bowl, India didn't have anyone for that seam-bowling allrounder's slot. If it's a good summer and if it gets dry and pitches turn in England as well, India have the option of playing two really good spinners."

"If India wins a couple of good tosses, India will have two really good spinners. It can turn in UK. They'll be wary of starting with pitches too damp and too green because of India's pace-bowling attack. So they'll have to prepare good wickets, and good wickets in England, from my experience of playing there, the sun comes out and if you don't water the wicket for five days, days four and five, it can turn," he added.