Dwayne Bravo's song "Champion" had become quite a hit and the West Indian keeps it alive for special occasions. 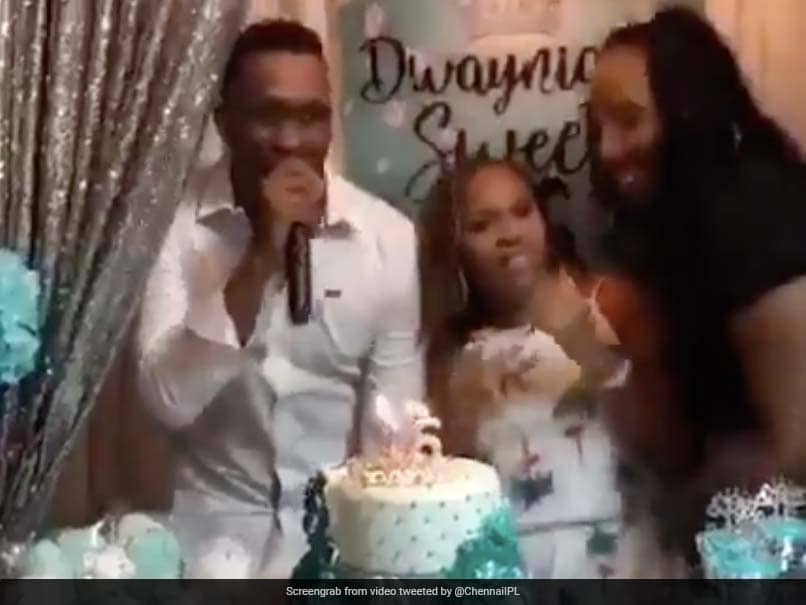 Dwayne Bravo's "Champion" song has made its way into many team victories and celebrations, most famously the West Indies' 2016 T20 World Cup win where the team danced to the tune of DJ Bravo. So, when Bravo's daughter Dwaynice turned 16 on August 3, Bravo senior's chartbuster rocked her birthday party. In a video posted by Bravo's IPL team Chennai Super Kings on Twitter, the cricketer is seen DJ'ing with the "Champion" song playing in the background at Dwaynice's birthday party. The daughter grooves in as well by sharing a microphone with her dad to sing the song along with their friends and Dwayne's partner Rejina Ramjit.

Also seen is a large birthday cake and a banner in the background that reads "Dwaynice's Sweet 16". The grandiose of the affair is apparent as photographers can be seen hurrying across the frame even as friends of the Bravos huddle around the family perhaps waiting for the birthday girl to cut the cake. In a swift blow, Dwaynice blows off the candles, which are moulded to read "16".

Bravo's next cricket assignment is likely to be the Caribbean Premier League where he leads the Trinbago Knight Riders. Subsequently, he is expected to fly over to the UAE to play for the Super Kings, his IPL team, who would look to add to their three IPL titles when the tournament gets underway on September 19.

The IPL has been moved from India to the UAE owing to the prevailing coronavirus pandemic and will be held from September 19 to November 10 in three cities – Dubai, Abu Dhabi and Sharjah.

Dwayne Bravo Cricket
Get the latest updates on India vs Australia Series, check out the India vs Australia Schedule for 2020-21 and Ind vs Aus live score . Like us on Facebook or follow us on Twitter for more sports updates. You can also download the NDTV Cricket app for Android or iOS.