Deepak Chahar became the talk of the town after he returned the best-ever T20I bowling figures of six wickets for seven runs, including a hat-trick. 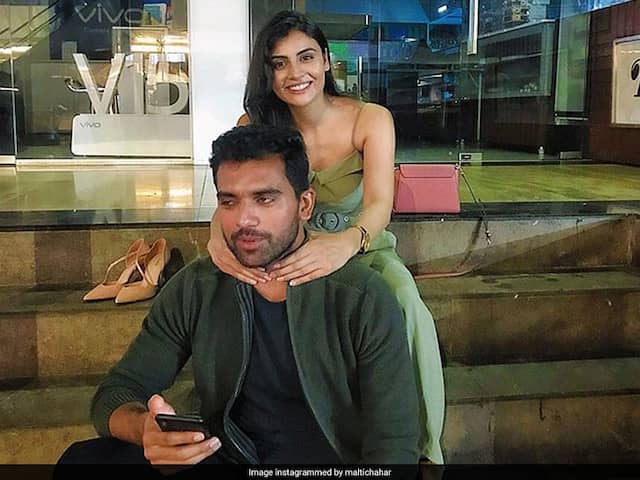 Deepak Chahar's sister Malti Chahar congratulated her brother after he became the first Indian to claim a hat-trick in men's T20 International cricket during the third and final T20I between India and Bangladesh in Nagpur on Sunday. "So so so so so proud of you. To the hat-trick and best figure 3.2-0-7-6 in international t20. OMG..I still have goosebumps @deepak_chahar9 love you brother. More power to you," Malti Chahar captioned a video snippet from the match, in which Deepak Chahar can be seen celebrating his remarkable feat.

So so so so so proud of you To the hat-trick and best figure 3.2-0-7-6 in international t20 OMG..I still have goosebumps @deepak_chahar9 love you brother more power to you #bleedblue #indiancricket #world #record

The 27-year-old Agra-born fast bowler finished 6/7, the best-ever figures in the history of men's T20I cricket.

The record for best figures in T20Is was previously held by Sri Lanka's Ajantha Mendis, who claimed figures of 6/8 against Zimbabwe in 2012.

As far as the hat-trick is concerned, Chahar is the only Indian male to achieve this rare feat in the shortest format. Woman cricketer Ekta Bisht was the first Indian to take a hat-trick in T20Is in a match against Sri Lanka in 2012.

Chahar struck twice in two balls of the third over to derail Bangladesh's chase of 175. He took his third wicket in Mohammad Mithun in the 13th over to keep the visitors at bay.

Chahar came stronger in the death overs as he dismissed Shafiul Islam on the last ball of the 18th over, before removing Mustafizur Rahman and Aminul Islam in consecutive deliveries of the final over.

With Chahar's hat-trick, India bowled out Bangladesh for 144 with four balls to spare the clinched the three-match T20I series 2-1.

"I never thought of this, not even in my dreams. I have been trying to work hard since my childhood and my efforts have paid off," Chahar said at the post-match presentation ceremony.

Just two days later, Chahar claimed another T20I triple -- this time for Rajasthan in a domestic match in the ongoing Syed Mushtaq Ali Trophy against Vidarbha at Greenfield International Stadium, Thiruvananthapuram, on Tuesday.

Bangladesh Cricket Team Deepak Chahar Cricket India vs Bangladesh, 3rd T20I Vidarbha Cricket Association Stadium, Nagpur
Get the latest Cricket news, check out the India cricket schedule, Cricket live score . Like us on Facebook or follow us on Twitter for more sports updates. You can also download the NDTV Cricket app for Android or iOS.