Deepak Chahar Runs In With Full Steam To Bowl To His Sister Malti With A Twist At The End. Watch

Deepak Chahar's sister Malti shared a video on Instagram where she is facing her brother's delivery. 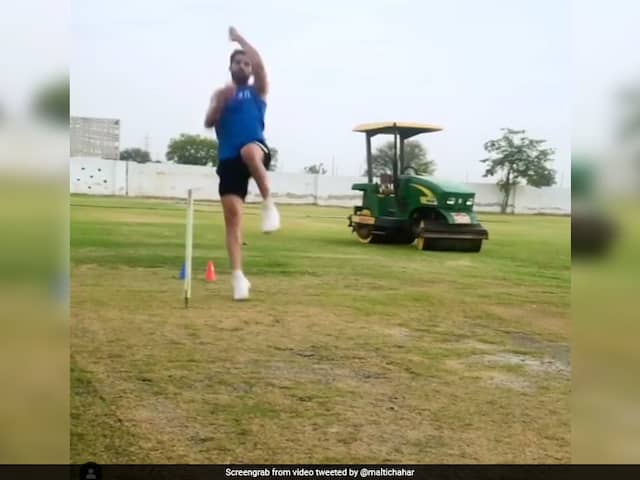 The video opens up with Deepak Chahar walking towards his bowling mark.© Instagram

The coronavirus pandemic has brought the sporting events a cross globe to a grinding halt. In India, the biggest sporting event affected by the pandemic is the Indian Premier League (IPL) -- the  biggest domestic T20 tournament in the world. Just like fans, players also want the IPL to get underway but with the coronavirus cases in the country on the rise, no one can be sure of when or if it will happen at all. However, during these trying times, everyone is doing their best to keep themselves and others entertained. Indian fats bowler Deepak Chahar's sister Malti Chahar on Tuesday shared a fun video on Instagram. "We miss IPL," she captioned the video.

The video opens up with Chahar walking towards his bowling mark, with commentator Sanjay Manjrekar's voice running in the background.

Next up, he strides in to deliver a ball but eventually bowls an under-arm delivery as the camera pans out to the striker, showing her sister on strike. Malti leans forward to drive the ball but it takes an outside edge and travels towards the slip cordon.

While this is not how a cricket match is played out these days, it certainly was enough to show how badly everyone is missing the cash-rich league with Malti's caption also reflecting the same.

Deepak Chahar holds the world record of best bowling figure in men's T20I game as he picked up 6/7 against Bangladesh last year.

During his spell, Chahar also picked up a hat-trick, helping India to a 2-1 series win, coming from behind after losing the first match.

Chahar, who suffered an injury while playing for India last year, would have been planning on using the IPL to impress the selectors and get back in the Indian team.

But his plans have taken a backseat for now as the the lucrative league has been postponed indefinitely due to the coronavirus.