Former captain Angelo Mathews led Sri Lanka with 87 off 90 balls, guiding the side to 294-8 before Dasun Shanaka backed his 30 off 14 with three wickets for 27 runs to complete the rout. 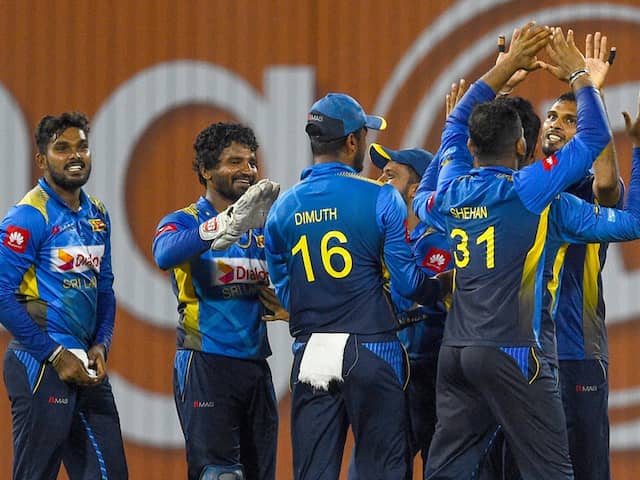 Sri Lanka put on a clinical performance with bat and ball to record a 122-run win vs Bangladesh.© AFP

Sri Lanka put on a clinical performance with bat and ball to record a 122-run win in the third and final One Day International and complete a clean sweep over Bangladesh in Colombo on Wednesday. Former captain Angelo Mathews led Sri Lanka with 87 off 90 balls, guiding the side to 294-8 before Dasun Shanaka backed his 30 off 14 with three wickets for 27 runs to complete the rout. Soumya Sarkar hit the only half-century for Bangladesh, 69 off 86 balls, but it gave Sri Lanka no trouble as the visitors were bowled out for 172.

Kasun Rajitha (2/17) and Lahiru Kumara (2/26) complemented Shanaka with the ball to complete the victory in 36 overs.

Leg-spinner Akila Dananjaya deceived Soumya with his flight to dismiss the left-hander in the 32nd over for his only wicket, rendering the rest of the game a mere formality.

Tail-ender Taijul Islam's unbeaten 39 off 28 balls only managed to entertain a sparse crowd at the R. Premadasa Stadium and delay the result.

"I worked hard after getting dropped from the side. I was confident with my batting which helped me perform well. We're all relieved as a team because we performed together," Shanaka said after the match.

The home side won the first two matches respectively by 91 runs and seven wickets.

"There are a lot of negatives, starting from myself to the team. We have to hold it tight and come back strong," said Bangladesh captain Tamim Iqbal, who scored 21 runs in the three matches.

Mathews and Kusal Mendis, who made 54 off 58 balls, set the platform for Sri Lanka's big innings after skipper Dimuth Karunaratne won the toss and elected to bat first.

Left-arm spinner Taijul Islam removed Karunaratne to break the partnership and Rubel Hossain got rid of Perera in the next over to bring Bangladesh back into the contest.

But Mathews and Mendis snatched the momentum back thanks to some sloppy fielding by Bangladeshi players.

Mushfiqur Rahim dropped Mathews on 32 off Shafiul before Sabbir Rahman gave the former Sri Lankan captain another life on 63 off Mehidy Hasan's bowling.

The island nation's cricket board has dedicated the match to pace bowler Nuwan Kulasekara who announced his retirement last week.

Tamim Iqbal Soumya Sarkar Cricket
Get the latest Cricket news, check out the India cricket schedule, Cricket live score . Like us on Facebook or follow us on Twitter for more sports updates. You can also download the NDTV Cricket app for Android or iOS.