The BCCI has left the decision to use neck guard on the cricketers despite growing calls to make it mandatory. 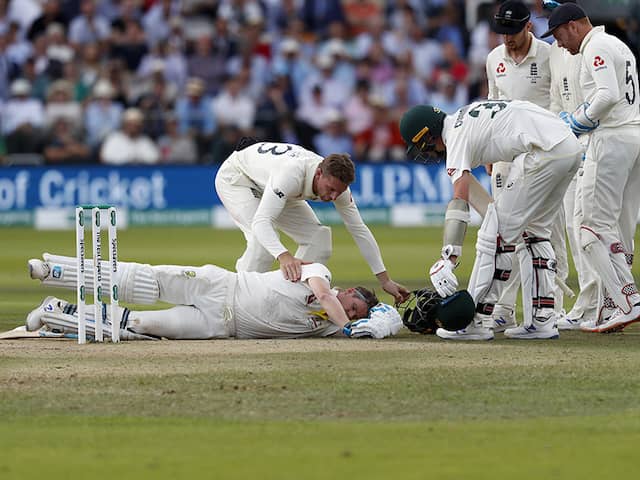 The BCCI has briefed its players on the importance of wearing anti-concussion helmet but left the decision to use neck guard on the cricketers despite growing calls to make it mandatory. Compulsory neck guards on helmets for Australian cricketers are "not far away", the national team's sports medicine chief said on Monday after Jofra Archer a snorter felled Steve Smith during the second Ashes Test.

While it is still not mandatory but the ICC's cricket committee has extensively deliberated on the issue and came out with concussion substitute -- a change in rule that has been welcomed by all and one that Australia effectively used it in the form of Marnus Labuschagne in the second Ashes Test.

"Once the new rules on concussions came into effect, the BCCI briefed the captain as well as the coaching staff about it. We have told them about helmets with anti-concussion element -- neck guards.

A few players including Shikhar Dhawan use it but we can't force them. Helmet is also about matter of comfort," a senior BCCI official, privy to the development, told PTI.

The official informed that after the Phill Hughes tragedy, the BCCI had asked its players to speak to their respective helmet suppliers to design a more protective head gear.

"But helmet is something that a player should be comfortable with. Some players may find it difficult to manoeuvre or feel a bit discomfort around the neck region. Till ICC doesn't make it mandatory, I believe we should leave it up to the players," he said.

"I think it (helmets with neck guards) should be (mandatory)," Peter Brukner, a former doctor of the Australian cricket team from 2012-2017, told The Australian newspaper.

However, some of the former and current Indian players feel that it cannot be made mandatory based on Smith's technique only.

"I would always listen to what Sunil Gavaskar has to say with regards to playing short balls. Watch the ball till last moment. But the odd delivery will hit you. It's all about the technique. Look at the bowlers of yesteryears. Michael Holding, Malcolm Marshall, Imran Khan and in our time Shoaib Akhtar, Brett Lee. They were all quick," said senior off-spinner Harbhajan Singh.

"You can't tell a youngster to copy Steve Smith's technique. It's very unique and very effective. But for him only. Also every team doesn't have a Jofra Archer-like bowler. It could be against a team with medium pacers on Feroz Shah Kotla. Why do you need a neck guard there," Harbhajan asked.

"Sachin Tendulkar used to wear 'Forma' helmets and Virat (Kohli) does the same. Rahul (Dravid) used to wear CMD while a lot of players use 'Masuri' helmets.

"I can tell you when I used CMD, I would have some discomfort near my neck region as the side grill of the visor would graze it. But Masuri had a wider base and I felt comfortable. So it's an individual choice," Dasgupta said.

Comments
Topics mentioned in this article
Harbhajan Singh Deep Dasgupta Cricket BCCI
Get the latest Cricket news, check out the India cricket schedule, Cricket live score . Like us on Facebook or follow us on Twitter for more sports updates. You can also download the NDTV Cricket app for Android or iOS.