Bangladesh's Tour Of India In Doubt As Players Go On Strike

Bangladesh cricketers have gone on strike ahead of their tour to India. 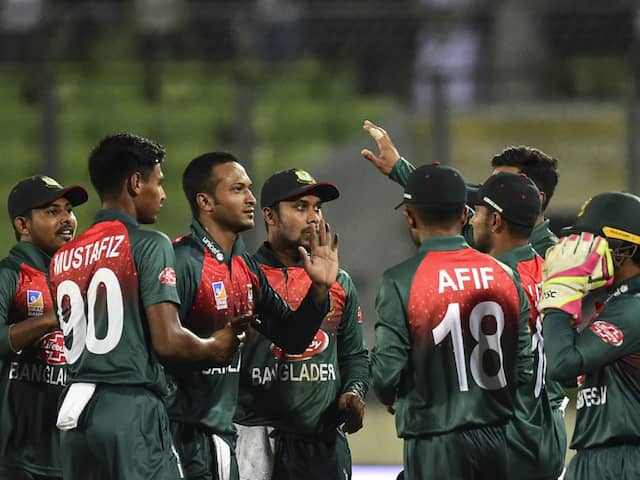 Bangladesh's tour of India is in trouble after Test and T20I captain Shakib Al Hasan, in a press conference on Monday, revealed that the players will not participate in any cricketing activities if their 11-point demand is not met by the country's board. Bangladesh are set to tour India for a three-match Twenty20 International series and a two-Test series, which starts on November 3. However, the series in India is now under cloud following the unprecedented stand taken by the Bangladesh players. The boycott plan was announced by the country's top players such as Test and T20 captain Shakib Al Hasan, Mahmudullah and Mushfiqur Rahim at a press conference in Dhaka. Nearly 50 players are part of the protest.

A boycott of any cricket activity for the foreseeable future will have an immediate impact on the National Cricket League, currently in progress. The action could also jeopardise the training camp for next month's tour of India and possibly the tour itself.

During the tour starting November 3, Bangladesh are scheduled to play three T20 Internationals and two Test matches as part of the World Championship.

"We have to respect the local coaches, physios, trainers and groundsman. They get really a little amount of salary at the end of the month," senior opener Tamim Iqbal said on behalf of the players at the press conference.

The camp was supposed to start this week with the team's spin consultant Daniel Vettori in attendance.

"The BCCI will wait and watch the developments closely. This is an internal matter of the Bangladesh Cricket Board and until and unless we hear from them, there is no need for us to make any comments," a senior BCCI functionary told PTI.

However, many in the Indian Cricket Board feel that President-elect Sourav Ganguly's cordial relations with both players and officials in Bangladesh cricket might help in salvaging the situation.

"There is a Test match in Kolkata which will certainly generate a lot of interest among the Bangladesh fans keeping the local connect in mind. A lot of fans are expected to travel from Dhaka and it's surrounding towns to watch the match, a first in Kolkata. I believe that they will pay heed to our president's request if the situation demands," another BCCI official said.

One of the major points raised by the players was better remuneration for those competing at the first-class level.

"A first-class cricketer gets only 1500 taka as the daily allowance. I don't think this is enough for a cricketer in order to get a healthy lifestyle. At the same time, we are demanding to increase the travel allowance. We will be happy if BCB ensures the air tickets for travelling for the First-class cricketers around the country."

Sources in the BCB believe that the tour is remains on course as Bangladesh Prime Minister Sheikh Hasina is committed to attending the second Test at the Eden Gardens from November 22.

In case Bangladesh forfeits, the ICC will award the Test series to India who will get 120 points.