Australia vs New Zealand: BJ Watling was well out of the frame when Tim Paine got the ball, but the Australia Test skipper fumbled the opportunity. 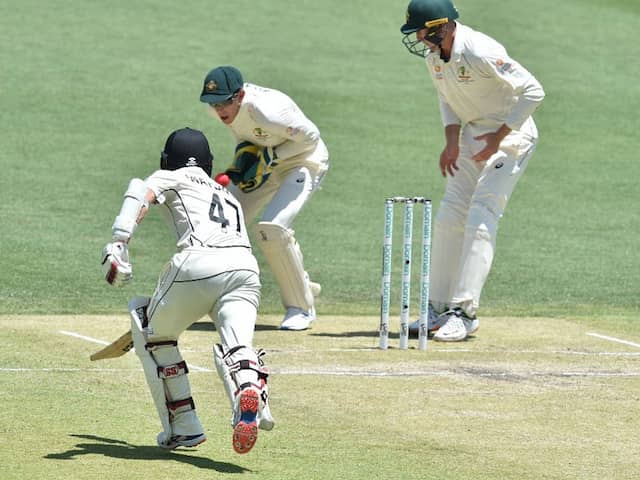 Tim Paine had an easy opportunity to send BJ Watling back to the pavilion.© AFP

Australia Test captain Tim Paine was in for some embarrassment when he fumbled an easy run-out chance, giving New Zealand wicketkeeper BJ Watling an early life on Day 3 of the first Test in Perth. As Watling took off for a second run, he was left stranded in the middle of the pitch when Ross Taylor sent him back as Nathan Lyon collected the ball. Watling was nowhere in the frame when Lyon threw it towards the striker's end and would have been on his way to the pavilion, but as the ball bounced just in front of Tim Paine, he was not able to gather it and it popped out of his gloves and Watling made it home safely.

An early chance goes by!

However, the fumble did not cost Australia much as Pat Cummins castled Watling a few overs later, leaving New Zealand reeling at 120/6 after 37.3 overs in response to Australia's 416.

But that did not stop Twitterati from slamming Tim Paine for the missed opportunity.

"Can't wait for Alex Carey to replace him when Smith's captaincy ban ends! This could be costly!" one user tweeted.

"I think it's time that Paine goes. He's just becoming more and more useless as each test passes. I've heard many people call for him to be removed, and now l agree," added another frustrated user.

"I don't know how anyone defends Paine, worst in the world at reviews, average captain, poor batsman and misses chances like these often," another user tweeted.

"If Paine was such a 'nice guy', wouldn't he think it's time to step aside for the next keeper for Australia?" a user enquired.

One fan even invoked Nathan Lyon's fumble in the third Ashes Test that would have won the match for Australia and prevented Ben Stokes' heroics as he tweeted "Doing his best Nathan Lyon impression".

Tim Paine took over as Australia captain after Steve Smith and David Warner were banned following their involvement in the infamous ball-tampering scandal during their tour of South Africa in 2018. While he has a good record as captain and has gained notoriety for his witty sledging, Paine has come under criticism for a number of poor DRS calls and his indifferent form with the bat.

New Zealand Cricket Team BJ Watling Cricket
Get the latest Cricket news, check out the India cricket schedule, Cricket live score . Like us on Facebook or follow us on Twitter for more sports updates. You can also download the NDTV Cricket app for Android or iOS.