Afghanistan vs Ireland 2nd ODI Abandoned Due To Rain

Afghanistan posted 250 for seven in 48.3 overs before rain curtailed their innings and no further play was possible in Dehradun. 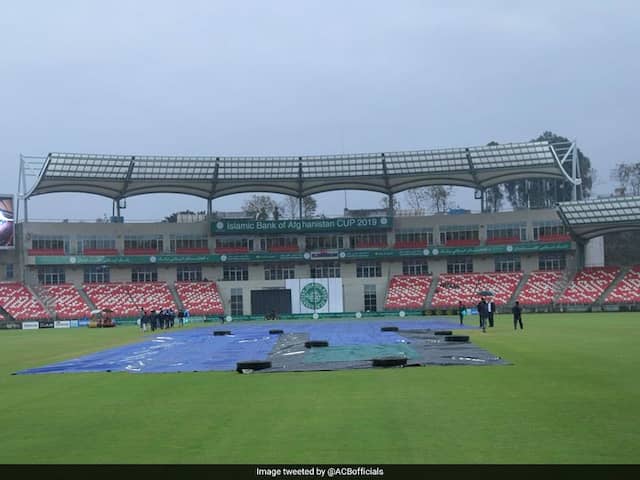 Afghanistan opener Hazratullah Zazai hit a blistering maiden one-day international half-century against Ireland but the second match was abandoned due to heavy rain in Dehradun on Saturday. Zazai, a left-handed batsman, hit 67 off 43 deliveries to help Afghanistan post 250 for seven in 48.3 overs before rain curtailed their innings and no further play was possible. The 20-year-old Zazai's knock was followed by two more fifties from Rahmat Shah, who made 54, and Hashmatullah Shahidi, who scored 52, after the Afghans elected to bat first.

The in-form Zazai, who amassed 204 runs including a highest of 162 not out in his team's 3-0 Twenty20 sweep of Ireland, gave the Afghans a blazing start as he hit 5 fours and 5 sixes.

Earlier in the first ODI on Thursday, Gulbadin Naib starred with both bat and ball as Afghanistan outplayed Ireland by five wickets to take a 1-0 series lead.

Naib took two wickets to dismiss Ireland for 161 and then struck a crucial 46 as Afghanistan achieved their target in 41.5 overs in the north Indian city of Dehradun.

Wicketkeeper-batsman Mohammad Shahzad put the chase on course with his 43 off 53 balls but his departure triggered a mini collapse as Afghanistan slipped to 104 for four.

Naib then put on 49 runs with skipper Asghar Afghan, who made seven not out, to stabilise the innings with some cautious batting against a disciplined Ireland attack.

Naib was out with Afghanistan needing nine for victory and Najibullah Zadran, who turned 26 on Thursday, celebrated his birthday with two sixes to complete the chase.

The third ODI is on Tuesday in Dehradun.

Afghanistan Cricket Afghanistan vs Ireland, 2nd ODI
Get the latest updates on IPL 2020, check out the IPL Schedule for 2020 and Indian Premier League (IPL) Cricket live score . Like us on Facebook or follow us on Twitter for more sports updates. You can also download the NDTV Cricket app for Android or iOS.