"Had No Idea What To Do": Aaron Finch On Bizarre Bhuvneshwar Kumar Delivery

Aaron Finch decided to get have a question-answer session on Twitter as he spent time at home with the coronavirus forcing everyone inside. 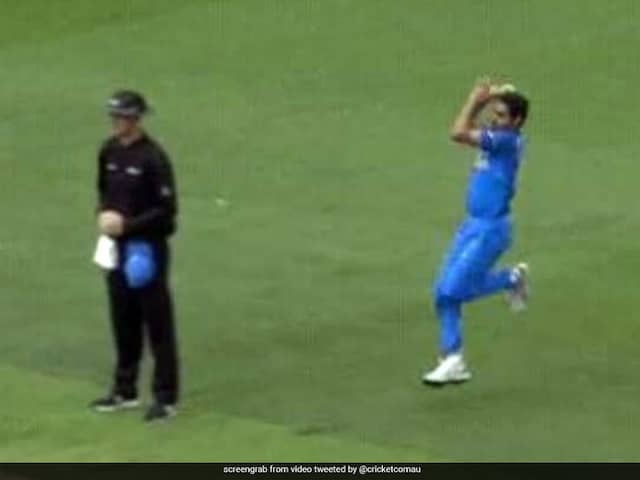 Bhuvneshwar Kumar had bowled from behind the umpire to Aaron Finch in an ODI in 2019.© Twitter

Australia's limited-overs captain Aaron Finch, who is spending time at home like most cricketers across the globe due to the on-going coronavirus pandemic, decided to kill some time by having a Q&A session with his followers on Twitter on Friday. While some asked him serious questions like what is his favourite moment as a cricketer, there were others who were just looking to have a little fun. One user tweeted an image of Bhuvneshwar Kumar bowling a bizarre dead ball to Finch and asked him what he thought while facing that delivery.

"I had no idea what to do...shouldn't have pulled away, I got out next ball...last ball of the over," Finch tweeted in response, adding an angry emoji.

I had no idea what to do...shouldn't have pulled away, I got out next ball...last ball of the over https://t.co/bMaHRFSQr4

The delivery in question took place during the third and final ODI of India's tour of Australia on January 18 last year.

Bhuvneshwar Kumar had tormented Aaron Finch throughout the series and was looking to pile on the misery in the match in Melbourne as well.

For the final delivery of the ninth over, Bhuvneshwar bowled a short ball from behind the pitch and a bewildered Finch moved away. The umpire ruled the delivery as a dead ball despite protests from the India pacer.

Bowling the final ball of the over again, Bhuvneshwar delivered a beautiful in-swinger that rapped Finch on the pad as he tried to come forward and defend and the umpire had his finger up.

India beat Australia by seven wickets in the match to sweep the series 3-0.

Asked how he felt about opening the innings with Sachin Tendulkar at Lord's for MCC against the Rest of the World, he tweeted "It was like a dream, one of my greatest cricketing memories."

He also cheekily said he was very nervous when he was asked if he was excited about being interviewed by his Royal Challengers Bangalore teammate Yuzvendra Chahal for 'Chahal TV'.