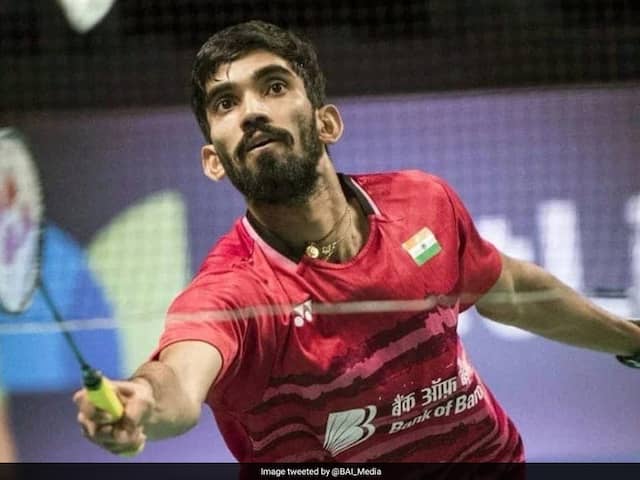 Former champion Kidambi Srikanth and Sourabh Verma advanced to the quarterfinals but young Lakshya Sen bowed out of the men's singles contest at the Syed Modi International Badminton tournament in Lucknow on Thursday. Third seed Srikanth, who had lifted the title in 2016, eked out a thrilling 18-21 22-20 21-16 win over compatriot Parupalli Kashyap, who is also a former two-time champion here. The world no 12 Indian will next square off against seventh seed Son Wan Ho of Korea in the Super 300 tournament.

Sourabh, a winner at two Super 100 events in Hyderabad and Vietnam, defeated fellow Indian Alap Mishra 21-11 21-18 to set up a clash with Thailand's Kunlavut Vitidsarn, who accounted for World Championships bronze medallist B Sai Praneeth 21-1121-17 in another round two match.

Lakshya, 18, who has been on a roll with title wins at Belgian International, Dutch Open, SaarLorLux Open and Scottish Open last week, couldn't produce his best and went down to the experienced Son Wan Ho, a former world no 1.

Ajay Jayaram was also ousted from the tournament after his gallant fight ended with a heart-breaking 18-21 21-14 28-30 loss to China's Zhao Jun Peng.

Women's doubles pair of Ashwini Ponnappa and N Sikki Reddy retired after they were lagging 0-2 in the opening game against English pair of Chloe Birch and Lauren Smith.

Simran and Ritika, who won the Senior Inter-District State Open Championships in Latur and the All India Junior (U-19) Ranking in Tamil Nadu, will face Germany's Linda Efler and Isabel Herttrich next.

Kuhoo Garg and Anoushka Parikh beat another Indian pair of Sheshadri Sanyal and Lavanya Sharma 21-13 21-6 to set up a meeting with Hong Kong's NG Wing Yung and Yeung Nga Ting.

Among other Indians in fray, Kapil Chaudhary and Akshay Kadam, Maneesha K and Rutaparna Panda faltered in the second round to bow out of the competition.

Comments
Topics mentioned in this article
Kidambi Srikanth Badminton
Get the latest Cricket news, check out the India cricket schedule, Cricket live score . Like us on Facebook or follow us on Twitter for more sports updates. You can also download the NDTV Cricket app for Android or iOS.
Advertisement