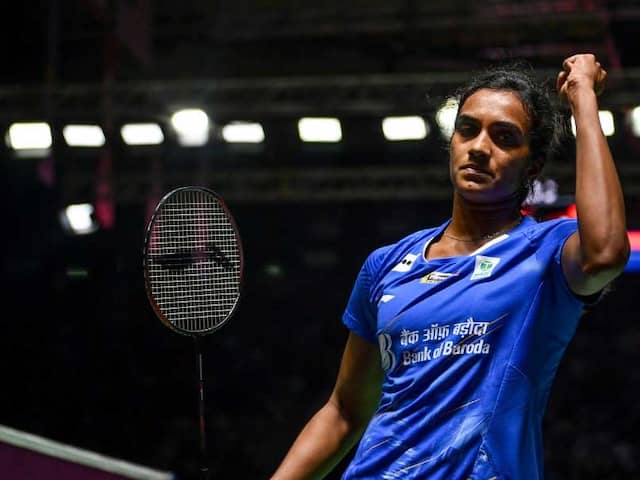 PV Sindhu bounced back after struggling early in both the games against Chen Yu Fei.© AFP

PV Sindhu marched into her first final of 2019 after brushing aside second seed Chen Yu Fei of China in the Indonesia Open semi-finals. After struggling early in the match, PV Sindhu fought back brilliantly to win the match 21-19, 21-10 to set up a final clash against fourth seed Akane Yamaguchi of Japan on Sunday. Sindhu was looking down the barrel with Chen Yu Fei holding an 18-14 lead but she won four straight points to draw level at 18-18. It was a PV Sindhu show from thereon with Chen Yu Fei having no answers to the Indian star's powerful smashes and pinpoint drop shots.

In the first game, Sindhu started slow with Chen Yu Fei in the lead for most of it. The Chinese shuttler went into the mid-break of the opening game, leading by a solitary point (11-10). She continued to put Sindhu under pressure and was looking comfortable to take the first game, leading 18-14.

However, Sindhu came roaring back, first winning four back-to-back points to draw level, and then holding off the Chinese to win the opening game 21-19.

It must have come as a massive shock to the Chinese shuttler because in the second game she was in sixes and sevens despite streaking into a 4-0 lead.

Like in the first game, Sindhu snuffed out Chen Yu Fei's lead and then sped past her to go into the mid-break of second game, leading 11-8.

It was all Sindhu after the interval as her powerful smashes and brilliant defensive play left her Chinese opponent completely frustrated.

And it showed. Chen Yu Fei made numerous unforced errors and poor judgement calls to hand the advantage to Sindhu.

Sindhu made no mistake, and completely dominated the Chinese, finally wrapping up the match by winning the second game 21-10.

Sindhu, who has already beaten one Japanese player, will be up against another when she takes on Akane Yamaguchi for the title on Sunday.