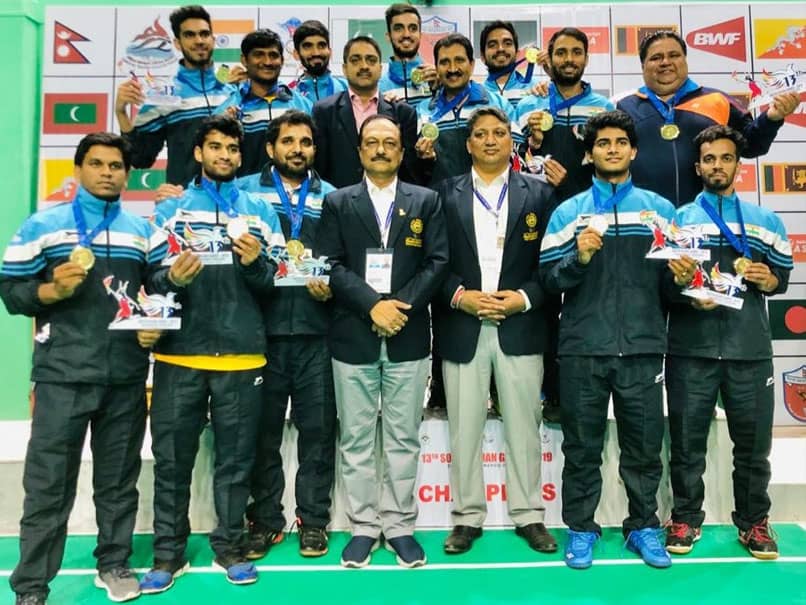 Indian men's and women's badminton team expectedly claimed gold medals after beating Sri Lanka in its respective finals at the 13th South Asian Games (SAG) on Monday. The men's team, led by Kidambi Srikanth, defeated Sri Lanka 3-1 in the finals, while the women's side blanked the same opponents 3-0 in the summit clash to make it a double bonanza for India. Srikanth started the proceedings for the men's team, struggling past Dinuka Karunaratne 17-21 21-15 21-11 in the opening match.

Siril Verma then gave India a 2-0 lead after his opponent Sachin Premashan retired with the scoreline reading 21-17 11-5 in the Indian's favour.

Krishna Prasad Garanga and Dhruv Kapila then completed the win with a 21-14 21-18 win over Karunaratne and Hasitha Chanaka in the second doubles match.

In the women's final, Ashmita Chaliha, Aakarshi Kashyap and Gayatri Gopichand claimed victories in the three singles to give India a 3-0 win against Sri Lanka.

The individual events will begin on Tuesday.

BAI President Himata Biswa Sarma said: "Team gold medal is always special and I am confident that the indian contingent will surpass the preview edition's performance."

India also won nine medals, including two golds, in taekwondo and one gold, two silver and a bronze in the triathlon event on the opening day.

India are currently placed at the second spot with 16 medals, including five gold, eight silvers and three bronze. India is being represented by 487 athletes in more than 15 disciplines.

Comments
Topics mentioned in this article
Badminton
Get the latest updates on IPL 2021, IPL Points Table , IPL Schedule 2021 , live score . Like us on Facebook or follow us on Twitter for more sports updates. You can also download the NDTV Cricket app for Android or iOS.
Advertisement