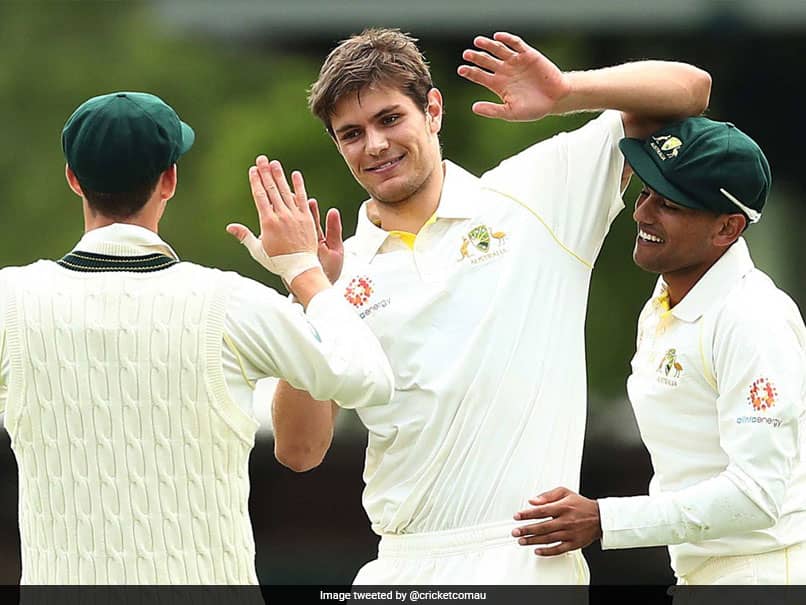 Aaron Hardie ended with figures of 4/50 in the warm up match against India.© Twitter

Team India captain Virat Kohli began preparation of a gruelling four-match Test series against Australia on a bright note by scoring 64 runs on the second day of the four-day warm-up match between India and Cricket Australia XI on Thursday. However, it was uncapped Australian teenager Aaron Hardie who hogged the limelight after the first day of the match was washed out by relentless rain in Sydney. The 19-year-old Australia pacer snared the wicket of Kohli, his latest high-profile victim after dismissing England skipper Joe Root in a similar warm-up match last year.

Kohli had smashed seven fours and a six against an inexperienced attack before English-born Hardie dismissed him.

Hardie, who ended with 4/50 off 13 overs, is one of Western Australia's most exciting prospects, having captained the state at under-17 and under-19 level, and earned a rookie contract for the 2018-19 season.

After torrential rain washed out the opening day of play at the Sydney Cricket Ground on Wednesday, India were keen to get in the middle for some batting practice in their only game ahead of the four-Test series.

CA XI were on 24 without loss at stumps.

Ajinkya Rahane Australia vs India 2018/19 Cricket
Get the latest updates on India vs England Series, India vs England , live score and IPL 2021 Auction . Like us on Facebook or follow us on Twitter for more sports updates. You can also download the NDTV Cricket app for Android or iOS.