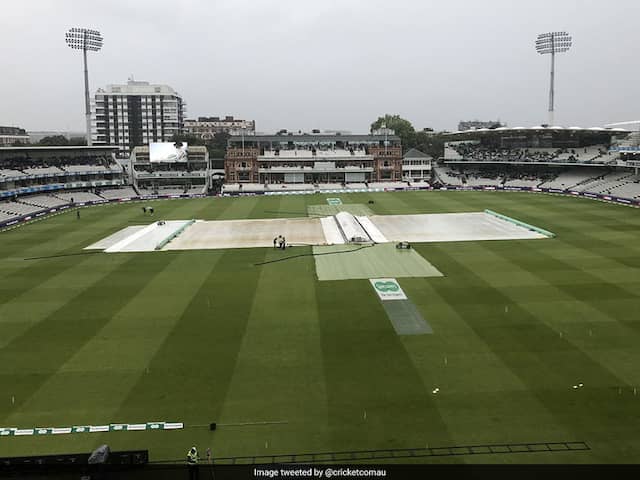 England vs Australia Highlights: First day's play called off due to persistent rain in London.© AFP

The first day's play was called off without a ball being bowled in the second Ashes Test between England and Australia at Lord's on Wednesday. Just when the umpires were gearing up for the toss at 7.30 pm IST after the rain enforced an early lunch, slight drizzle returned to cause further delay and the day's play was eventually called off. In the first Test, Ashes holders Australia registered a 251-run win in the first Test at Edgbaston last week to take 1-0 lead in the five-match series. It is 18 years since Australia last won an Ashes series in England. England have only won seven Ashes campaigns from behind, most recently when they took the celebrated 2005 series 2-1. They were set to give a debut to fast bowler Jofra Archer after James Anderson, England's all-time leading wicket-taker, was ruled out with a calf injury that meant he bowled just four overs at Edgbaston. Neither England nor Australia had yet named their teams. They are not required to do so until the toss takes place. (SCORECARD)

Lord's, London The Ashes 2019 Cricket England vs Australia, 2nd Test
Get the latest Cricket news, check out the India cricket schedule, Cricket live score . Like us on Facebook or follow us on Twitter for more sports updates. You can also download the NDTV Cricket app for Android or iOS.